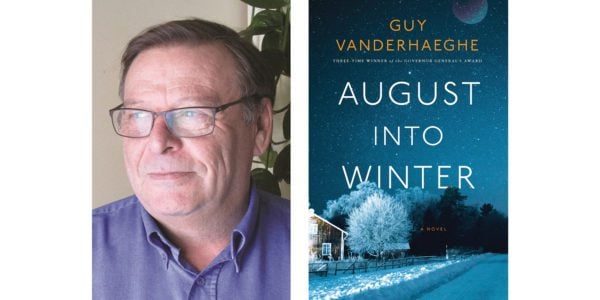 August into Winter, the stunning new novel from Saskatchewan writer Guy Vanderhaeghe, begins in the late summer of 1939. With the world on the cusp of war – press clippings on the trouble in Europe, and Canadian responses to it, lead every chapter – the town of Connaught is reeling from an escalating series of “pranks” and criminal activities, including breaking and entering. Constable Hotchkiss – half of the two-man police detachment – suspects Ernie Sickert, a 20-year-old musician. “‘I don’t like that prick,’ said Hotchkiss. ‘Thinks the sun shines out of his asshole.’”

When Hotchkiss confronts him, Sickert kills the police officer and flees town with the young object of his affections, Loretta Pipe. Corporal Cooper recruits the Dill brothers to pursue Sickert. Both are damaged veterans of the First World War: Jack is a recluse, given to ecstatic religious visions, while Oliver is still reeling from the death of his wife.

In the wake of a storm and debilitating flood, the pursuers and the pursued cross paths with Vidalia Taggart, who has just arrived as the new teacher at a tiny rural school. Taggart has been forced from her life and job in Winnipeg, blacklisted and exiled to Clay Top as “a home wrecker and a ‘dues-paying’ member of the Communist Party of Canada. Which was worse? Take your pick.” She is also suffering the loss of her lover, who died while fighting in the Spanish Civil War, and the connection between her and Oliver seems both natural and inevitable.

August into Winter roots itself comfortably in familiar tropes – the Bonnie and Clyde–style fugitives, the Western-style posse, the isolated schoolmistress – embracing them outright before shredding them utterly. By focusing on the truth of the characters, their contradictions, and their inner conflicts, Vanderhaeghe has created a work that feels comfortably lived-in – not because of its surface familiarity but because of its keen understanding of both individuals and the society in which (or just outside of which) they live. By drawing on the Civil War journal left behind by Taggart’s lover, the rumblings of war overseas, and Jack’s visionary religious work-in-progress, Vanderhaeghe presents a stunning panorama of humanity in its heights and depths. It’s potently presented against the backdrop of the rural Saskatchewan landscape and the intimate topography of its central relationships.

Vanderhaeghe’s first novel in nine years – which has already been shortlisted for the Atwood Gibson Writers’ Trust Fiction Prize – August into Winter is a powerful example of both craft and reader experience. It draws its strength chiefly from its comfort in its own contradictions: it is a suspenseful page-turner but simultaneously relaxed and laconic; it is by turns beautiful and stunningly violent; it is realistic almost to a fault but elevated and highly stylized (Sickert’s dialogue, for example, which is peppered with period slang and malapropisms, is a work of art in itself); it is a novel filled with anger and pain but, somehow, it remains rooted in at least the possibility – and the varieties – of love. It’s a breathtaking achievement.

Update, April 8: The review has been updated from the original to reflect the correction to the name of the character Jack Dill, originally noted as Frank.