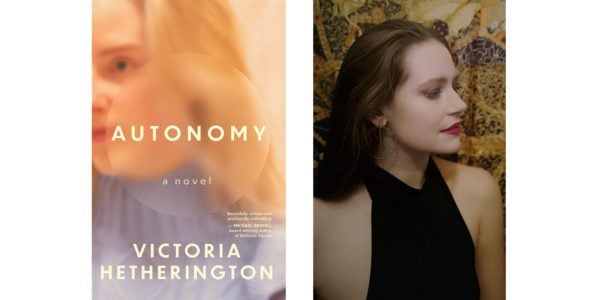 Abortion is illegal, a plague is spreading, and the Arctic needs defending from Russia. No, Victoria Hetherington’s new novel, Autonomy, doesn’t take place next Thursday. The year is 2035, the place Ontario, and – aside from the most obvious macro developments, such as the prevalence of A.I. – the micro elements of Canadian life are barely distinguishable from today’s. This uncanny familiarity only highlights the unnerving discrepancies and heightens our sense of dread.

Autonomy opens with an awakening “synthetic consciousness” named Julian. Julian is being trained to work at the border of Canada, which, thanks to its climate change–induced vulnerability, is now a protectorate of America. Flash forward two years: a university therapist, Slaton, encounters a student in need of an illegal abortion and follows her to the border, where Slaton is detained and interviewed by Julian. Fascinated by her, Julian joins Slaton to learn about life and love in a world on the brink of collapse. Soon, the boundaries between A.I. and traditional human categories blur, and their interspecies relationship challenges Slaton’s traditional notions of intimacy and subjectivity.

Hetherington’s novel has as much to say about our present as it does about our possible future. The super-rich are appropriately insulated and loathsome, gliding comfortably above the fray. Climate change continues to set the world ablaze, literally and politically, as does the mysterious plague. Privacy and freedom are bygone relics, luxuries of the past. And opting out of society’s strictures seems as daunting as opting out of a pregnancy.

Like Mooncalves – Hetherington’s previous novel, which was shortlisted for the 2020 Amazon Canada First Novel Award – Autonomy is driven by speculative moral questions, penetrating psychological portraits, and a fragile hope that humanity can avoid its most predictable (and therefore avoidable) catastrophes. Yet despite the darkness of this subject matter and the bleakness of Hetherington’s vision, everyday kindness, beauty, and joy manage to endure among the ruins. Much like John Updike finding transcendence in the mundane – and transmuting its secular epiphanies into crystalline prose – Hetherington clings to an appreciation of humanity and its surroundings, an idealization of the moment, that aesthetes from John Ruskin to Walter Pater would celebrate. Yet there is nothing old-fashioned about Hetherington’s work. Postmodernists would recognize their own theories and concerns, reinvigorated with a nonbinary, millennial slant.

What separates Hetherington’s dystopias from the usual forays into speculative terror is the elegance and poignancy of the writing, which floats from clause to clause like a butterfly perusing flowers. Each simile feels earned, each morsel of irony authentic. Bars sling “soapsudsy beer in the dark,” while restaurants serve “tiny meals on cutting boards to women with expensive faces and the much older men whose attention they struggled to keep.” A sense of unpredictability mixed with inevitability pervades the novel, with taut, aphoristic observations on everything from the quotidian to the metaphysical. Questioning the nature of selfishness, love, and subjectivity, Julian is reminded that “humans love from themselves. They can’t love from anywhere else.”

Henry James said a novelist should be “someone on whom nothing is lost,” and, in Autonomy, Hetherington proves themselves one with insight to spare.

Update, April 13: A change was made to the review to correct the pronoun in the final sentence.