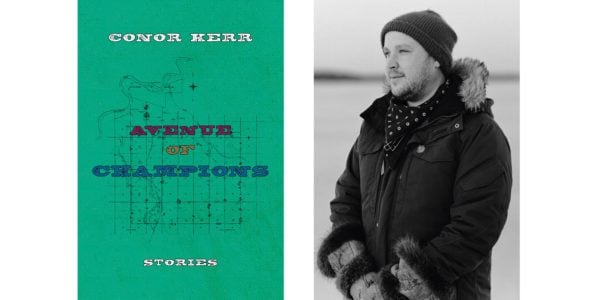 The debut short-story collection from Métis-Ukrainian writer and educator Conor Kerr, Avenue of Champions, is an account of disenfranchisement and displacement, both historical and contemporary. Its historical roots lie in the late 19th century, “when the Canadian government dissolved the Papaschase First Nation. All the Band members had been off hunting or at the Fort and the mounties and the Indian agent took advantage of that and declared the First Nation null and void. When her family tried to go back to their shacks to get some supplies, the mounties were already there and everything was up in flames.” That trauma and loss echo downward through generations, coming to rest on the largely Indigenous, largely impoverished neighbourhood along the titular Avenue of Champions: 118 Avenue in Edmonton.

The collection focuses primarily on Daniel, who is first introduced in “Bridges,” as he’s running away from an abusive group home with the slightly older Jason. It’s not the first time they’ve run away, and it won’t be the last. Finding shelter under the patio of the Fairmont Hotel Macdonald, the boys hear “the slurps, smacks and laughter from the people eating over our heads” – a truly haunting moment that tidily summarizes many of the book’s themes.

The linked stories of the collection unfold in a largely chronological fashion but shift between various characters and points of view, creating a panoramic overview of Daniel’s family and community, especially his beloved Granny, who grows weed in her apartment for Daniel to sell.

On its surface, Danny’s journey is what most would call a success story: he gets into university (after a harrowing visit during an open house night, and despite the negativity of his guidance counsellor), he graduates, he breaks free from the cycles of poverty and drugs that plague his community. Kerr, however, is not content with easy platitudes, and Avenue of Champions is suffused with a sense of hopelessness and futility in the loss that surrounds Danny and the impossibility of breaking away from generations of prejudice, violence, and trauma.

It should be noted here that the collection is varied and subtle in its approaches and includes a healthy sense of humour; it’s not all darkness.

Kerr’s characters are richly developed and complex, fully realized in their contradictions and often self-destructive drives, but despite his considerable empathy and understanding, he doesn’t let anyone off the hook. Even Daniel comes to look back on his “successful” life with regret. Working at the Wasenakwan Student Centre in “Anytime Anywhere,” chronicling the deaths and losses around him, Daniel reflects: “I don’t pretend that we’re changing anything. I don’t have illusions that our work is going to make a difference. Honestly, I should have known better at the start.”

While Avenue of Champions is a powerful and necessary read, it requires a certain amount of patience from its readers. The shifts between stories and characters ultimately coalesce as a narrative movement, but there are a number of stories that feel too slight, too interwoven, to truly stand on their own as stories – as opposed to parts of a larger whole. With Daniel established as the recurring focal character, however, the collection finds its way, and readers find themselves enmeshed in Daniel’s life, in the community, in the despair of a people. The result is heartbreaking and thought-provoking.

The wheel of history rolls on, crushing all in its path.