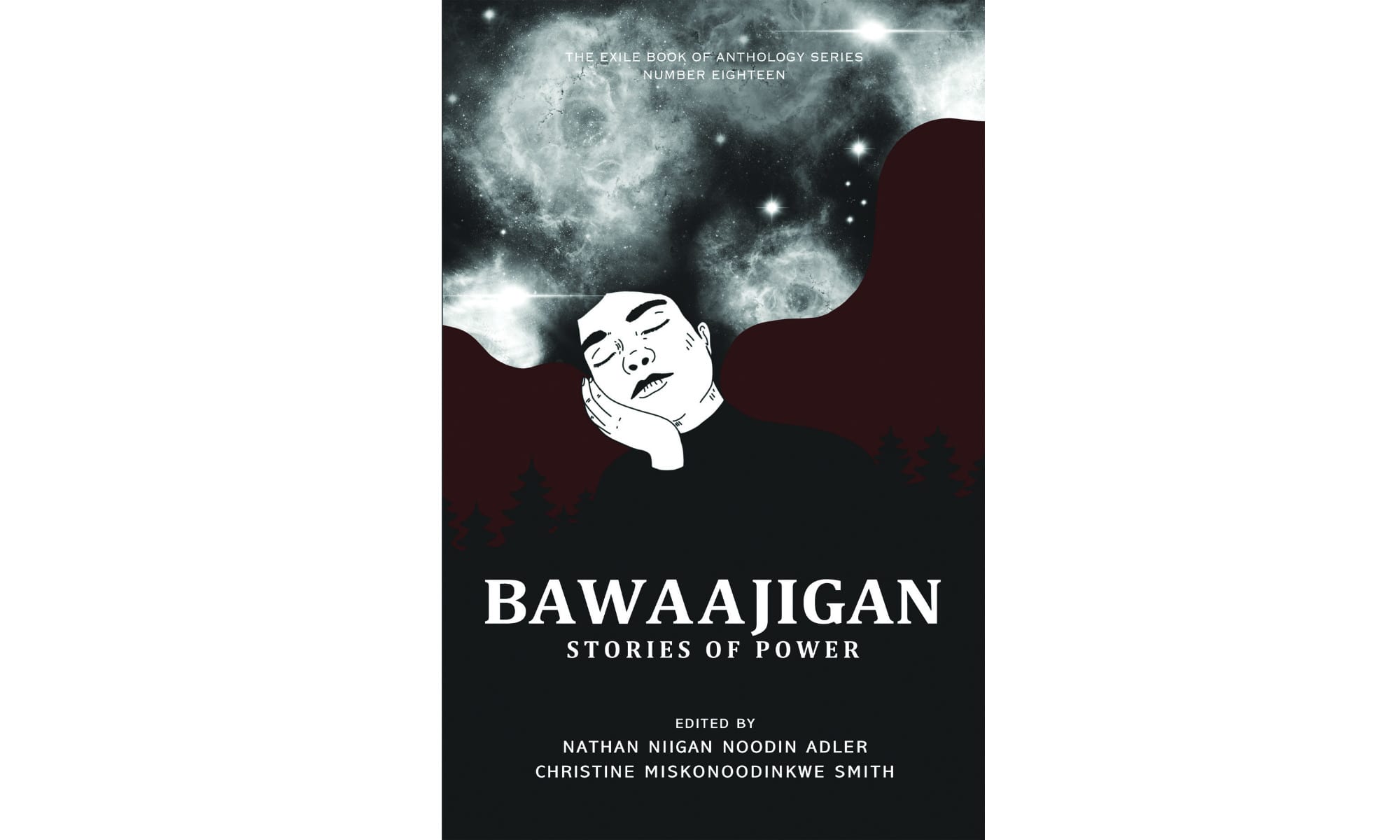 In the introduction to Bawaajigan: Stories of Power, the 18th instalment of Exile’s Anthology series, co-editor Nathan Niigan Noodin Adler explains the volume’s title: “Bawaajigan,” he writes, is “the Anishinaabemowin word for dream, or vision.” The subtitle came about as a result of co-editor Christine Miskonoodinkwe Smith musing “on the power of our stories and dreams … In this collection, dreams play a powerful role in how they shape the destiny of characters. … They are stories that have the power to reveal, illuminate, and heal.”

While this might seem a somewhat daunting mandate, Bawaajigan more than lives up to the introduction’s promise. This is, overall, a stunning collection of writing from Indigenous sources, stories with the power to transform character and reader alike. As is true of most anthologies, not all of the stories in Bawaajigan are equally strong, but the high points are numerous and often dizzying in their force.

As one might expect, contributions from heavy-hitters Richard Van Camp and Lee Maracle are among the many highlights. In “The Truth Between Us,” Van Camp dreams a summoning ritual, as a circle of aunties call back a woman from beyond the grave. “There her auntie stood under the full moon: washing the stump of a hand. Washing the stump of a leg. Some of the women washed body parts and prayed as others smudged the body and each other with a burning rat root.” She is being resurrected as a protector for the women, against men “who steal our girls, our women, and sell them.” As one of the aunties instructs, “We need you to hunt them. We need you to help kill those men. Eat them. Free those girls.” It chills as both a fiction and as a reflection of an underlying cultural imperative.

Maracle’s story, “The Room Was Crowded,” is similarly powerful but in a subtler, more realistic manner. Following Henry as he attends a conference about the legacy of the residential schools, the story folds into a dream in which the protagonist reclaims his history and recovers the name he lost when he was taken from his family. The story is utterly devastating in its restraint.

Just as powerful are stories from lesser-known writers. “Jumpers on Both Bridges,” by David Geary, originally from New Zealand and of Maori and Pakeha/settler mixture, begins with a mythic tone, with Eagle hungry and looking for food. It quickly shifts gears and turns into a hilarious trickster story featuring Eagle, Trees, and an unfortunate Domino’s delivery kid who suffers a highly unpleasant injury when he attempts to urinate into a soda can during a traffic jam.

“Melinda Irene and Madame Bouve,” by Inuit (as well as Malemuit, Holikachuk, Black, and Seminole) writer Yugcetun Anderson, is a sharp departure in tone. Using a facsimile of torn notebook pages, the story recounts in brief, letter-like journal entries the isolation, sexual abuse, and despair suffered by Melinda Irene. It is a heartbreaking experiment with voice and form, and its brevity – forcing readers to follow the story in the spaces between the entries – only adds to its impact.

“Ghost Walk,” by Gerald Silliker Pisim Maskwa, is a standout among standouts. As the narrator observes a residential school in the distance, “like a rotten tooth pointing up at the night sky,” he wonders why he survived while others did not. “What made me so special? Out of all the Native children, why am I still alive?” But did he survive? The narrative jumps into the school, “walls covered with blood,” hallways crowded with children. The narrator moves through the dream, a blurring of the past with surreal, horrific overtones beyond the real and remembered. But this is not a story of ongoing victimization: true to the volume’s description, the latter stages follow the narrator as he regains his power and finds his freedom. It’s a triumphant moment etched with an unconquerable, uncontrollable sadness.

This is an inspiring and demanding collection, and that is by design. The stories challenge  readers on numerous levels: thematically, narratively, and linguistically. As Smith writes in her afterword, a clear decision was made not to include a glossary of the various languages and terms used in the stories. “[In] the end, we decided against it. We felt that if we were to include a glossary, the onus to educate would be on us. We felt that this wasn’t fair, because as editors we hope these stories will encourage Indigenous and non-Indigenous people to seek out resources to learn more about these cultures and languages.”

Anthologies like Bawaajigan can play a significant role in this process of education, removing passivity and distance from what might seem – to outsiders – like fantastic events, depicting both horrors and hope with an equal force and vitality.