Part of the fun of reviewing children’s books is encountering an author-illustrator team determined to craft a fresh take on one of the more traditional kidlit categories. When it works, as it does with Beastly Puzzles by Rachel Poliquin and Byron Eggenschwiler, the result is a genre book that is somehow sui generis.

Beastly Puzzles is a new spin on the animal science book. Instead of simply tweaking the more straightforward, National Geographic Kids approach to exploring our planet’s creatures, Vancouver’s Poliquin and Calgary’s Eggenschwiler turn the whole thing into a bizarre game. Each spread asks kids to guess the identity of a hidden animal based on objects (and occasionally ideas) that stand in for that animal’s more notable characteristics. For example, an air siren, chainsaw, survival suit, motor, goggles, and two gardening trowels adds up to … a beaver! (The air siren relates to the way beavers alert each other to danger by slapping the water with their tails.) And so on with a bullfrog (a lasso, a bicycle horn, two marbles, etc.), a polar bear (steak knives, 300 kg of pure lard, showshoes, etc.), and a dozen other animals. 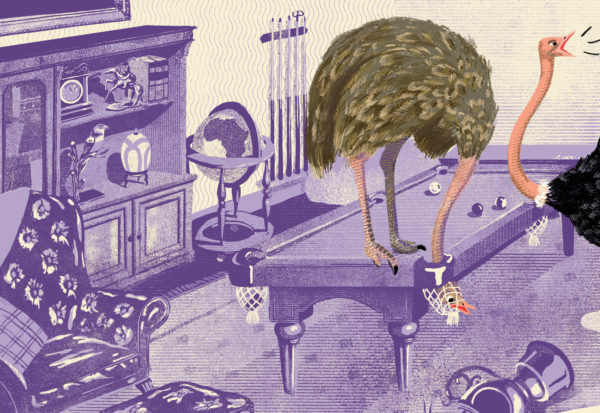 Few young readers will actually be able to solve the book’s puzzles – Poliquin admits in her introduction that they are “impossibly tricky” – but that’s not the point. By relating animals to inanimate objects, Poliquin – who has written for grown-ups about taxidermy – compels kids to employ lateral thinking and thus see some of these familiar creatures in a new light.

Eggenschwiler’s images revel in the thingness of the book’s concept. Each visual spread is like a diorama, filled with details that are somehow simultaneously old-fashioned and surprising. The settings Eggenschwiler depicts (boat house, fishing shack, circus dressing room, etc.) are just as odd and unexpected as the puzzles themselves. For example, the underground laboratory of a horror-movie mad scientist – complete with metal hooks, an invisibility potion, and a foot in a jar – conceals a three-toed sloth. It makes no literal sense; but just like Beastly Puzzles as a whole, it somehow makes perfect sense once you see it.