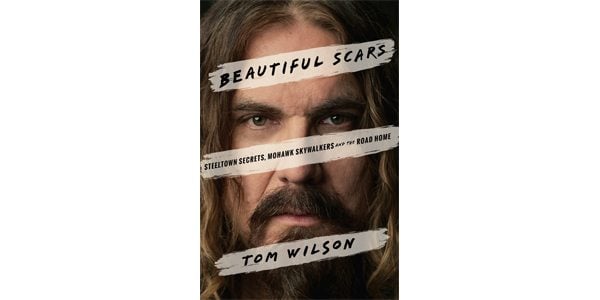 Generally speaking, the readership for a musician’s memoir is drawn almost entirely from the subject’s established fan base. The higher the musician’s profile, the larger the potential audience. So what are we to make of Beautiful Scars, the new memoir from Canadian singer-songwriter Tom Wilson? He’s been a fixture on the Canadian scene for a couple of decades, but there remains, unfortunately, limited name-recognition where he is concerned.

In this case, it comes down to the book itself. In its power and scope, Beautiful Scars is likely to appeal to an audience far beyond Wilson’s listenership, as well as serving as an introduction to one of this country’s most highly regarded journeyman players. The book isn’t just good. It’s stunning.

Beautiful Scars embraces the tropes and trappings of the traditional rock memoir to sketch Wilson’s dirty life and times (to borrow a phrase from Warren Zevon). Wilson, who burst to wide attention as the leader of the 1990s band Junkhouse, has never been a superstar, so Beautiful Scars is something of a rueful rags-to-slightly-better-rags story (a lovely motif throughout the book has Wilson figuring out how to get from his home in Hamilton to Toronto at various stages of his life, from relying on public transit to cadging rides). It’s the story of a lost boy who fell in love with  music and dedicated his life to it, despite its difficulties and costs.

It’s also a strikingly frank book. Wilson is upfront about the damage he has caused, his philandering, and drug use. (The fact that it was his record-label executives who staged the intervention that got Wilson into rehab feels as though it could only have happened in Canada.)

If this were only a chronicle of his career, finishing with Wilson finding an accidental home in the folk-country embrace of Blackie and the Rodeo Kings (initially a one-off project with Colin Linden and Stephen Fearing), as well as crafting a new persona as Lee Harvey Osmond (with members of the Cowboy Junkies and the Skydiggers), Beautiful Scars would more than satisfy. Drugs, sex, music, redemption – what more could you possibly want?

But Wilson’s book has much more to offer.

Threaded through the narrative, from its earliest pages, is the central mystery of Wilson’s life. “Even as a kid my existence as the son of Bunny and George Wilson seemed far-fetched to me,” Wilson writes.  When, as a young boy, he asks Bunny about his birth, she erects “a wall to protect her secrets, and as a result I built a wall to protect myself.” For more than five decades, Wilson lived as a stranger to himself, struggling with the awareness that something was wrong, that he didn’t belong.

Only after the deaths of Bunny and George does Wilson come to understand what he has suspected for his entire life (and which readers of Beautiful Scars will have twigged to in the first handful of pages). The secrets around his life form a fundamentally Canadian story, rich in history and steeped in darkness. They also separate Beautiful Scars from the ranks of the typical rock memoir, and place it firmly on the shelf with the likes of Angela’s Ashes and The Glass Castle – riveting accounts of family and secrets, poverty and peril, adversity and triumph.