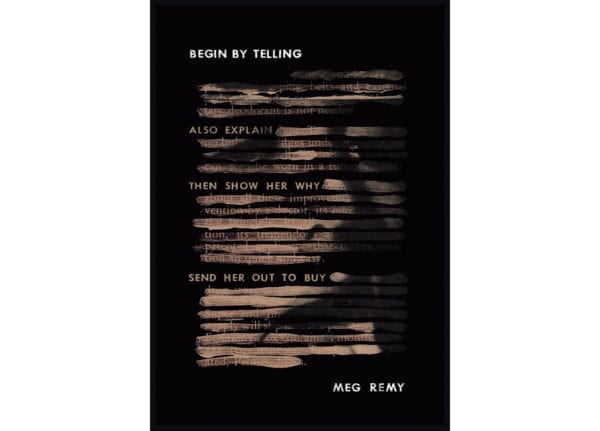 “I wish I could tell my teenage self … not to worry what other people think,” say a multitude of voices in a poem-like interlude on Heavy Light, the seventh album from Meg Remy, a.k.a. U.S. Girls. The Polaris Prize–shortlisted musician turns to the essay form in her first book, in which she looks inward to examine her younger selves. Remy recalls and reclaims her experiences coming of age in a media-saturated U.S. and turns an unflinching eye on abuse, rape, and abortion.

In lyrical vignettes, Remy begins with “an age that feels too fresh for memory” (she is still in diapers), and a memory of a television falling on her: “Though I suffer no physical injury, I can never forget what I saw. The TV screen is made up of tiny shapes and lines working in tandem to create The Big Picture, like staring at the dog in the yard through the screen door.” Remy’s narration is simultaneously retrospective and immersive because of its playful associations and use of present tense, both of which careen us through time with ease.

Remy’s style surprises. She recalls her mom taking her to see a Beatles cover band in concert; her fangirl experiences are bordered by two footnotes, one of which is an anecdote from Irish musician Bob Geldof about seeing the Beatles perform: “I remember looking down at the cinema floor and seeing these rivulets of piss in the aisles. The girls were literally pissing themselves with excitement. So what I associate most with the Beatles is the smell of girls’ urine.” And on the next page, Remy grows up: “It wasn’t pee in my underwear. It was blood.” This sentence receives a page to itself; the following page begins with the italicized scream, “You’re a woman!” – the transition neatly conveys Remy’s sarcastic humour.

A quarter of the way through the book, Remy offers an “Abridged List of Violence You Witnessed Between 2004 and 2012,” which takes stock of her experiences, including the man who pulled a knife at a record store, a pregnant woman who was shot multiple times, and a man who harasses her on the subway train. This inventory is written in spare prose, laying the groundwork for Remy’s harrowing experiences of rape and abuse.

Begin by Telling is a book that is deceptively light as a result of its minimalist style and Logan T. Sibrel’s trippy illustrations, but the stakes are clear. In “Phone Call – Summer Afternoon,” a conversation with Remy’s friend Kassie written like dialogue in a play, “Meg” says: “How do I tell a story I’ve never told out loud or even to myself? I mean, I’m not sure I can go there. It’s so painful. I worry people won’t believe me or that I’ll get sued.”