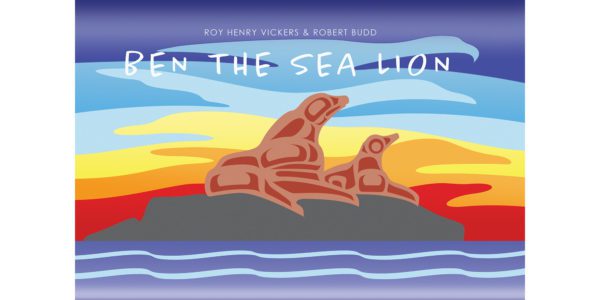 Stories are a lifeline that intertwines the past with the present. In Ben the Sea Lion, Roy Henry Vickers both grabs our imagination and pays homage to his hometown and life in the small fishing community of Kitkatla on the north coast of British Columbia.

The story begins when Uncle Johnny brings home a baby Steller sea lion that accidentally got caught in his fishing net, and seven-year-old Roy and his cousin Bussy assume responsibility for it. The first order of business is giving it a name, and after much banter, they finally agree on Ben – short for Teeben, which in Tsimshian means “sea lion.”

Ben becomes the boys’ best buddy, and together they have many adventures. As Ben continues to grow, their parents are concerned about him living with the family and in the town. It’s decided that he must return to his own kind. But will he be able to adjust? After two attempts, Ben finds himself at home among other sea lions in Sea Lion Rocks. When the boys see Ben rocking back and forth like someone listening to music, they know he’s happy.

Serving as both artist and storyteller, Vickers, who has co-authored many children’s books including 2015’s Cloudwalker, beautifully captures the story in 15 original illustrations that encapsulate the essence of the narrative. Vickers’s distinctive art, often characterized by bold images marked with clean lines, evokes the beauty of the West Coast and reflects a genuine love and respect for the land. Their mellifluous subtlety strikes an emotional chord within the reader. While all the illustrations featured in the book resonate with the reader, the final one – with Ben sitting proudly on the highest rock, juxtaposed against a beautiful sunset – speaks volumes: Ben is home.

Reading Ben the Sea Lion is like walking through an art gallery. The illustrations are a rich sensory experience that ignites a sense of wonder, immersing readers in an unmatched reading adventure. The storytelling is an intimate reflection of how we can live harmoniously within an ecosystem. Stories like this one allow younger readers to appreciate Indigenous culture and open their minds to the world around them.