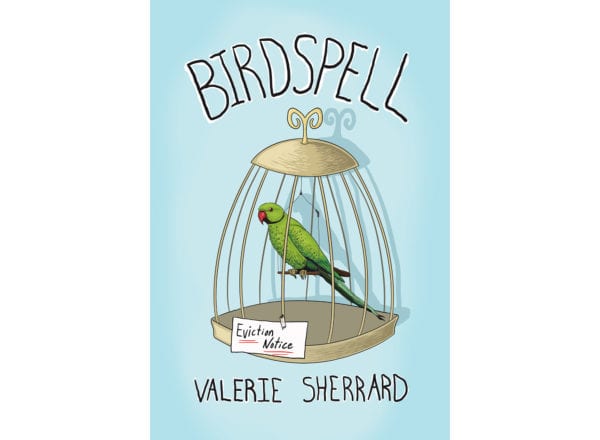 Valerie Sherrard is a respected children’s writer, based in New Brunswick, whose considerable body of work demonstrates a deep understanding of children and teens in difficult situations. In her latest book, Sherrard takes her readers inside the mind of 12-year-old Corbin, who lives in poverty with his single mother.

Partly as a result of his mother’s bipolar disorder, Corbin has developed excellent coping skills: he tiptoes around her frightening mood changes, backs away from her blistering attacks, and scrounges for odd jobs to pay for food every time she quits work or stops taking her medication. He is very good at managing life; he is not good at trusting anyone, asking for help, or making friends.

All that changes when Corbin adopts a sympathetic parakeet named Sitta from Izelle, a chatty schoolmate. Izelle can no longer keep her pet but insists on visiting rights. Sitta is a good listener and has learned to speak a few words. Corbin finds himself wondering just how much the bird understands; after a dramatic episode, he suspects Sitta might have the power to cast a spell that could change his life. Little by little, Corbin lets down his defences, first with Sitta, then with Izelle, and he eventually befriends a network of people who care about him.

Sherrard writes with authority about the inner world of a child forced to take on an adult role because of an ill parent. The novel explores Corbin’s insecurity and fear as he and his mother ride the waves of her disorder together. Experience has taught him to expect that their situation will only get worse, yet he still hopes that things will get better.

Honest and straightforward, with no sugar-coating of the challenges of bipolar disorder, Birdspell offers remarkable insight to young readers unfamiliar with mental-health issues. At the same time, it provides rare validation for those children who struggle with it in their daily lives. Occasionally, Corbin’s clear-headed psychoanalysis of his mother jumps out of the narrative and feels more like an adult’s commentary rather than his own perspective. And the timeline can be somewhat jarring, as when two months pass between the end of one chapter and the beginning of the next. But these are minor flaws in an otherwise compelling and compassionate tale.

Despite the gravity of the subject matter, Birdspell is a very readable book laced with humour and grace.