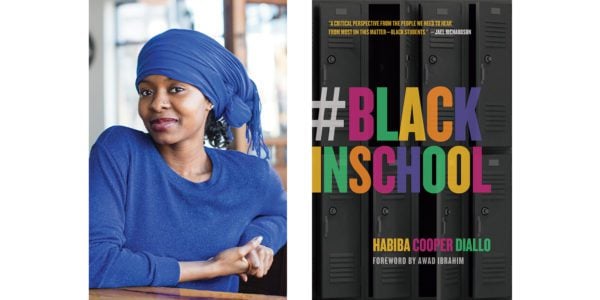 #BlackInSchool, the debut book by author and women’s health advocate Habiba Cooper Diallo, is a damning nonfiction account of the systemic anti-Black racism she observed and experienced during her last three years at a high school that touted itself as the country’s “most diverse school east of Montreal.”

In 2011, at the age of 15, Diallo had already lived through more than someone twice her age. Still mourning the loss of her father a year earlier, she relocated from Toronto to Halifax with her mother. The loss of a parent and a community would initiate a seismic shift for any freshman high school student. For one who looks like Diallo – Black, with African and Caribbean ancestry – the move to a city where racism is a part of everyday life was its own kind of grief.

So Diallo began to write. Throughout high school, she poured out her pain, frustration, disbelief, and anger onto the pages of her journal. Her entries in #BlackInSchool, written between 2012 and 2014, could be read as one long question: do I belong here?

Numerous pages detail the “microaggressions of racism” that followed Diallo through to her graduation, from “curricular racism” to “teacher-student harassment.” The latter is illustrated via a disconcerting exchange between Diallo and teachers who insisted on policing her use of the school’s elevator – a privilege, yes, but one Diallo had been granted in a letter from her vice-principal.

Fortunately for Diallo her academic achievements were exemplary. She was an International Baccalaureate diploma student, bilingual, a consumer of non-Eurocentric literature and culture at home, and an emerging activist. All of these attributes contribute to the book’s analytical yet vivid prose. Her entry #HighSchoolandtheBlackBody reads like anaphora. But the book’s success is its ability to lay bare the mental health crisis of Canada’s Black youth who are failed by school administrators, staff, and teachers. Diallo’s raw emotion – even occasional outbursts – makes it clear she is in pain. This is the weight of the diary format.

While #BlackInSchool lacks some nuance, Diallo’s voice is fully realized, and it is the voice we need right now. And she wants to know: “How do we, then, put an end to this cycle of racism towards Black students, so that the bodies of the future generations of Black students will not be hurt, stigmatized, hindered, and nullified in high school?”

Correction, March 18: This review has been corrected from the print version to reflect that Diallo is not currently pursuing a master’s degree in public health.