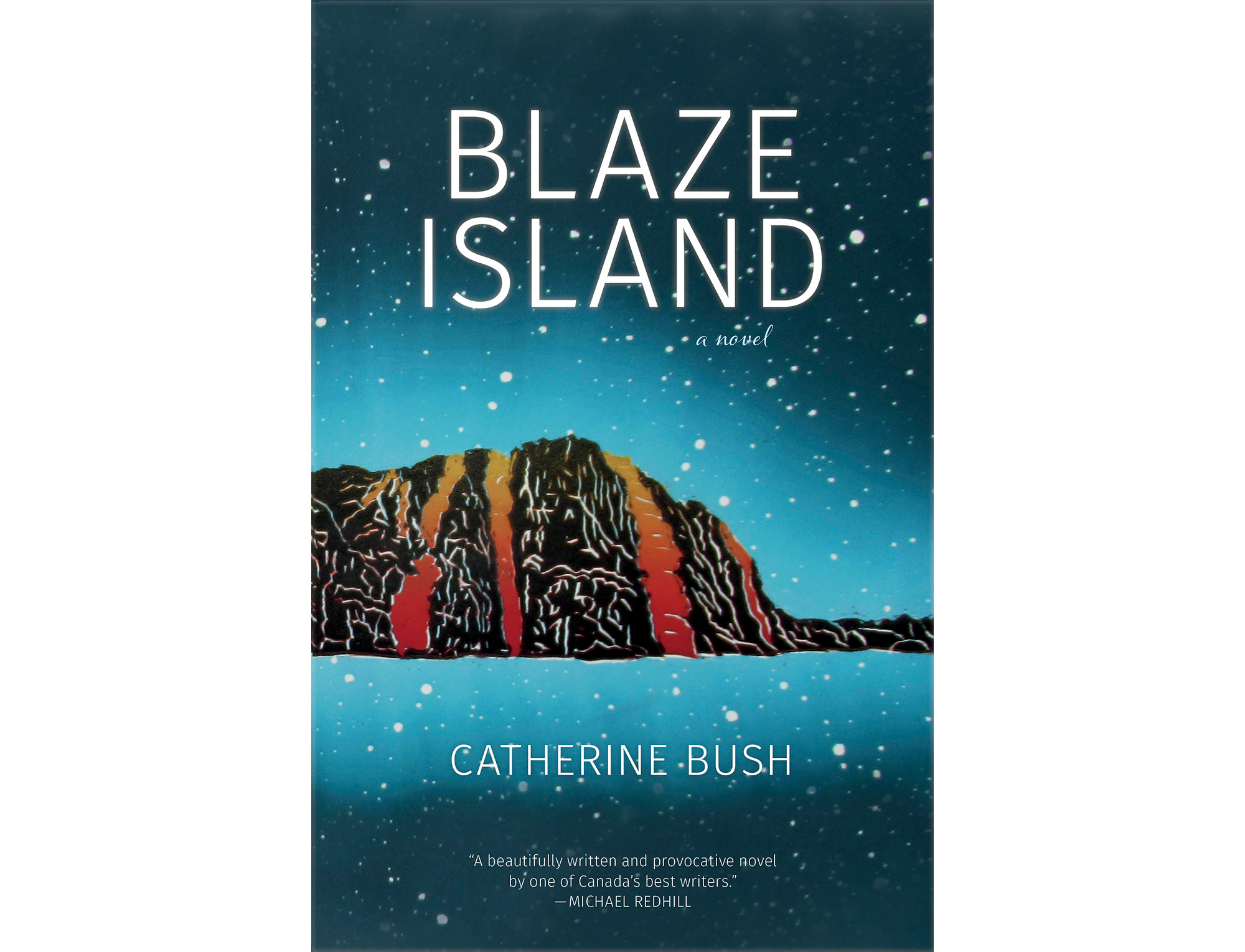 Coming into Catherine Bush’s Blaze Island is akin to entering a world with a large cast of characters, not unlike a Charles Dickens novel. While Dickens’s novels are cultural artifacts of their time, Bush’s book can be considered an environmental artifact of our own. Set in a not-so-distant future, the novel acts as an alarm bell for the ways the rapidly changing climate will set back the world as we know it.

Bush situates this modern reworking of The Tempest on the “storm seasoned” Blaze Island, a stand-in for Fogo Island off Newfoundland and Labrador. The prologue is a love letter from Miranda’s dead mother, Jenny, to her daughter. Jenny exists through most of the narrative as a ghost who haunts Miranda in moments of happiness, internal turbulence, and trauma. The juxtaposition of a frontmatter map and the prologue sets the tone for the novel, which at its core is a story of a parent trying to build a better future for their child.

The novel unfolds through the eyes of two protagonists: 19-year-old Miranda, who lives with her climate-scientist father, Milan/Alan, and similarly aged Caleb, who lives with his mother, Sylvia. In both sets of relationships, the parent takes on the role of teacher. In Miranda’s case, her father teaches her survival skills, such as running a house using electricity from solar panels and a wind turbine, along with the skills he was trained for, mainly studying the weather. Caleb relies on similar teachings from Sylvia – foraging, gardening, shearing sheep, rearing goats, preserving fish and meat, and reading the weather using wind changes and cloud formations. In parts of the narrative, the parent-child relationships become interchangeable, with Sylvia attending to Miranda, and Alan educating Caleb.

At the same time, both parents entrust secrets to their children, creating a level of tension in the overall narrative. While Miranda is forced to hide her father’s identity (he changes his name from Milan to Alan before coming to the island), Caleb contends with the mystery of his own father’s identity. Caleb’s biraciality is often hinted at via his brown skin, the bullying he suffers at school, and his cousins who suggest he is “different.” Both Alan and Sylvia believe that they are protecting their children and, yet, their secrets feed into tensions in their respective family relationships.

These are not the only tensions in the novel. There is the overarching strain of the rapidly changing climate resulting in unusual birds – known as “accidentals” – sent off course and never seen before on the island. Miranda and Caleb no longer speak to each other due to an incident that hints at violence, Alan and Sylvia flirt with a romantic relationship that has a premature end, and a brown-skinned stranger washes up on Alan and Miranda’s doorstep on a stormy night. All of these fuel the narrative, much like a storm that keeps building before it becomes a tempest. A series of mysteries that all seem to be heading toward a singular end point pull the reader in.

While Bush’s novel is advertised as an exploration of life post–climate crisis that uses realism rather than dystopia or magic realism, moments of the latter add texture to the work. Instances in which Miranda encounters her mother as a ghost or Caleb finds himself being lifted outside of himself into the body of a bird while flying a plane push against an otherwise foreseeable, realistic denouement. The novel could have explored the implications of these anti-realist moments more fully, yet they are fleeting.

Simultaneously, characters with intriguing side stories move in and out of the novel, creating moments of desire and disruption. Particularly memorable are Agnes, Alan’s Inuk scientist friend and former student, and the queer former lovers, Teresa and Kim, who live on the island. The brief encounters with these characters are similar to the transitory moments of possibility mentioned earlier – hinted at but not fully worked out.

In Blaze Island, Bush relies on a schematic narrative but the conceit comes off as predictable. Her modus operandi to use The Tempest as a prototype for a climate-justice narrative based in our current reality imposes limitations. She forces the narrative structure of the original play upon her characters instead of letting her characters take the narrative to new places. The book becomes a prediction of what is to come should we fail to heed the mounting evidence of the current climate crisis. The grimness of this logic excludes other possibilities for the novel, forcing out the moments of magic.