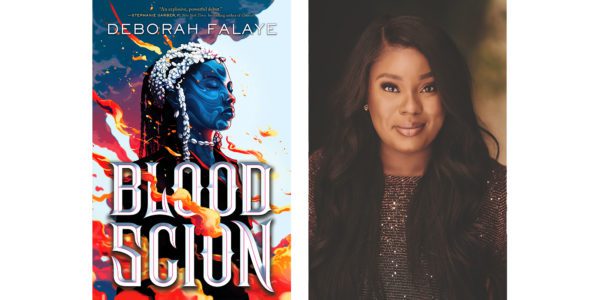 On the heels of Tomi Adeyemi’s Children of Blood and Bone and Natasha Bowen’s Skin of the Sea comes a new foray into the epic world of Yoruba gods and monsters. Deborah Falaye’s young adult debut, Blood Scion, draws on Falaye’s Nigerian heritage to create an exciting fantasy infused with the magic of the Orisha pantheon. But this is not a story that encourages escapist enjoyment. From its gritty social commentary on colonization and imperialism to its depiction of an unforgiving heroine, Blood Scion demands critical engagement from its readers.

The empire of Lucis is in the midst of conquering the continent of Nagea, militarily and through the genocide of the Scions, magical humans descended from the Yoruba Orishas. In its pursuit of ever-expanding power, Lucis conscripts into its army 15-year-old Sloane, a secret Scion. Lucis’s military aims to groom Sloane into a child soldier, but Sloane has other designs. To take revenge for her mother’s death and free her people from Lucis’s tyranny, she will use her magic to destroy Lucis’s army from within. Sloane makes a bloody promise: turning her into a ruthless weapon will be the last mistake the Lucis empire ever makes.

As a Nigerian Canadian, reading Blood Scion was a joy, thanks in large part to Falaye’s attention to detail with respect to Yoruba culture. Falaye (from Lagos, Nigeria) uses her deep knowledge of African literature and folklore to build the convincing and terrifying world in which Sloane must survive. Indeed, this is an unflinchingly bloody book. Sloane is unapologetic in her hatred of Lucis; she has the power to incinerate humans at will – and the anger to do it. Through her main character’s slow descent into moral corruption, Falaye points to the costs of child exploitation, genocide, disinformation, and colonization. Rather than valorizing the military–industrial complex, Blood Scion deconstructs and challenges it with the flair and fury of the oppressed. It’s hard not to see shades of Nigerian author Chinua Achebe in Falaye’s critique of intra-African power relations, even with the novel’s eye on the larger global history of imperialism.

Falaye’s character-building is masterful. Sloane is compelling and immediately relatable despite her fantastical circumstances. Her desire to uncover proof that the Lucis army murdered her mother, the outpouring of emotions as she struggles to stay sane, and her understandable errors of judgment when pitted against other murderous child soldiers all remind us that Sloane is just a child stuck in a horrific situation. Even her romantic exploits coat well-trodden and beloved young adult tropes such as “found family” and “enemies to lovers” with the betrayal, torture, fear, and death that characterize Sloane’s reality as a child soldier. Sloane makes inhuman decisions to stay alive as she battles against humans and demons – and even against herself – so it’s hard not to think of the larger implications of her predicament even after setting down the book.

Fans of Six of Crows, The Hunger Games, and The Gilded Ones will find an enthralling read in Blood Scion – and the surprise twist will leave them reeling.