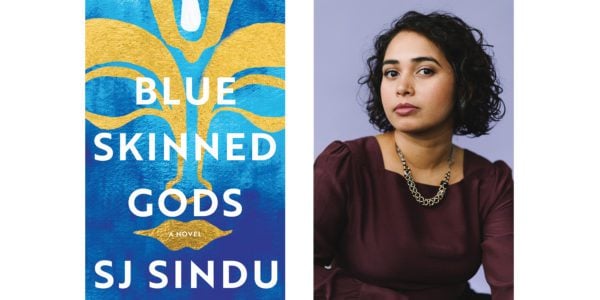 Stories of deceit and exploitation perpetuated with the help of blind faith abound, each more confounding than the last. In 2015, it came to light that a self-styled Indian godman had convinced 400 male followers to castrate themselves to get closer to God. In June 2021, a televangelist in Missouri, previously exposed and convicted as a fraud, was fined for selling fake COVID-19 cures. Cashing in on the spiritual voids of modern-day existence, miracle peddlers prey on the desperate and ignorant.

In her second novel, Blue-Skinned Gods, SJ Sindu, who teaches at the University of Toronto Scarborough, draws on the inexplicable pull of religion and blind faith to craft a powerful story of personal liberation.

Kalki Sami’s birth seems to be the fulfillment of an ancient prophecy – the coming of the saviour. In Hindu scriptures, Kalki is the tenth and final human incarnation of the blue-skinned deity Vishnu. He is predicted to appear in an age of darkness to end all evil.

Kalki does seem to tick the right boxes. He is the right caste (Brahmin), the right colour (blue), well versed in scriptures, and, at age 10, he performs three miracles to prove his divinity. More importantly – at least for the reader – his heart is in the right place. But is he truly divine?

The story switches back and forth in time and is narrated by Kalki as a child and as an adult. The narrative never loses pace, even as it trapezes across time and continents. The plotting is brilliant with twists you never see coming.

Whether describing life in an isolated ashram in a small Indian village or the busy streets of New York City, Sindu’s crisp, evocative prose is a delight. The characters that flit in and out of Kalki’s life are well developed and convincing, especially in the choices they make. And while the story is rooted in a specific culture and religious mythology, Sindu skilfully blends context into the narrative without resorting to information dumps or obscure references. The themes of family, avarice, and the perils of religiosity are familiar across cultures.

Whether or not you believe in his divinity, it takes little to become invested in the struggles of Kalki Sami. In many ways, he is reminiscent of Praneshacharya, the devout priest from Indian writer U.R. Ananthamurthy’s classic 1965 novel Samskara: A Rite for a Dead Man. Like Ananthamurthy, Sindu critiques religious orthodoxy not by delving into the psyche of the corrupt but through the doomed efforts of the sincere. Like Praneshacharya, Kalki begins to grow when he starts to question his upbringing. Contact with the wider world penetrates his ideological armour and pushes Kalki toward freedom one painful step at a time.

Though the themes Blue-Skinned Gods tackles are timeless, the message of the novel holds resonance for the present day. In a world often riven by religious conflict, the best service to the Almighty may be simply using your god-given head.