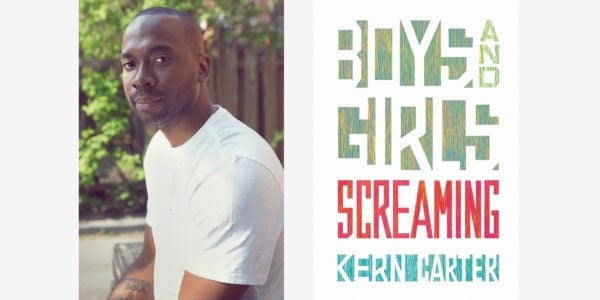 Can bringing together a group of traumatized friends and school acquaintances help eight teenagers overcome their struggles and move on with their lives? This is the premise of Kern Carter’s latest novel, Boys and Girls Screaming. When Ever’s father dies suddenly and her mother has a stroke soon after, her seemingly perfect and pampered world is thrown into turmoil. As if these two events weren’t enough, Ever’s been keeping a family secret that has been tearing her apart – a secret that is itself a fallacy. When she creates the titular support group with her best friend, Candace, her younger brother, Jericho, and a few others, the bond between the teens is immediate, but not without new troubles and near fatalities.

Interestingly, the novel is not narrated by the multiracial (but able to “pass”) Ever. Rather, its telling is split between Candace, a Black girl who was abandoned by her “fake mom” at age five and adopted by a well-off white family, and Jericho, who deals with struggles similar to Ever’s (take away the secret, add an intense crush on Candace). The first third of the book introduces the main characters, their issues, and their lifestyle: second homes, cars, horses, nannies and chefs, months-long vacations, and drug use. While getting to know the dynamics between Ever, Candace, and Jericho is important, too much time is spent on what the teens have and what the teens do.

But once the group sessions start, Carter’s writing really grips. The teenagers reveal tragic stories of rape, death, parental departures and reappearances, monster step-parents, and comings-out. The characters are honest and authentic, their voices wavering between childhood and maturity, their emotions alternating between feeling shattered and pretending to be whole.

The friend group as a support system is a clever way into the teen mind, and is reflective of whom teens turn to when facing problems. But it also makes the case that, depending on what youth are dealing with, there may be a very real need to speak to a parent, trusting adult, or professional, rather than figuring it out themselves. Part of growing up is learning to ask for help. As is speaking up to be truly heard: Ever gets the last word by narrating the final chapter, in which she acknowledges that truth and honesty can be an explosive mix – as well as a means to help her move forward with her life.