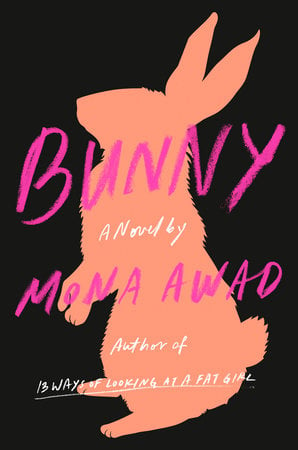 The author’s second novel follows Samantha, a sophomore MFA student in an experimental creative-writing program at a prestigious university called Warren. Samantha was born in a tourist town reminiscent of Niagara Falls; her relationship with her parents is melancholic and full of yearning. As a narrator, Samantha is caustic and deeply funny while simultaneously voicing an unshakable emotional heaviness.

Samantha’s cohort comprises a group of four young women known as the Bunnies, a quartet that resembles what the eponymous high-school girls in Heathers or the Plastics from Mean Girls might have turned into if they took a few women’s studies courses and were unleashed on an MFA program. Samantha’s relationship with the Bunnies is complicated: she despises them but also privately envies their wealth, beauty, and all-knowing closeness. “Bunny” is a term of endearment among the members of the group; the Bunnies have real names and distinctive personalities, but as the novel progresses, their cohesive status as a group overrides their individual identities.

Eventually, Samantha gets sucked into being a Bunny, almost despite herself. At the start of the semester, the Bunnies invite Samantha to a salon of their own. The theme – going beyond “the Body” – annoys Samantha, who feels the approach is opaque and pretentious. (She privately mocks the motif of “soup punk nihilism” that crops up in one of the Bunnies’ stories.) After listening to a superficially glowing critique of a Bunny’s story in a workshop, Samantha notes, “[A]t Warren, the ‘body’ is all the rage. As though everyone in the academic world has just now discovered that they are vesseled in precarious, fastly decaying houses of bone and flesh and my god, what material.”

The transgressive content of the Bunnies’ salons escalates and as they begin to trust Samantha, they inveigle her into an experimental “project” that trespasses on genre, gender roles, and patriarchy. It also relies heavily on mysterious drugs and elements of ritual blood magic.

Awad pulls off an absurd subversion of traditional character development in fleshing out the complex monstrosity of the Bunnies. Samantha’s relationship with Ava, her best friend and soulmate, is deeply queer coded, and their unabashed love for each other is one of the novel’s highlights. The nature and witchcraft imagery is similarly wonderful: Awad’s ability to set a scene and create unique characters is sufficient to allow a reader to confidently fall under the book’s spell regardless of how shocking the specific events of the story – exploding heads, rabbit-like doppelgängers with “harelips,” a “demonic animal man” summoned to “destroy [the Bunnies’] souls” – are.

Samantha herself is portrayed as unintentionally self-sabotaging. An ongoing theme involves the way Samantha is viewed, by herself and others, to be passive and relegated to experiencing life from the sidelines. Toward the end, a demonic doppelgänger of one of Samantha’s professors questions the way Samantha has depicted a character in one of her stories: “When is she going to be empowered, Samantha? When is she going to exercise agency?” Similar questions are asked of Samantha repeatedly, echoing a question the reader is induced to pose. Samantha’s desires and loneliness bubble underneath every situation she encounters until she is ultimately thrust into a reckoning of mythical proportions.

Awad’s style is brilliant – there are truly breathtaking sentences that embody a feminist beauty, notwithstanding the protagonist’s disdain of the fixation on literary trends like “engaging with the Body.” The atmosphere in the novel is at once tense and hazy – time, bodies, and details melt away in an almost surrealistic manner. Awad uses short, repetitive sentences to express urgency: early in her indoctrination as a Bunny, Samantha wakes up groggy and bloody and thinks to herself, “Saw. I think of the silver, toothy blade that cuts things. Trees. Women. Cartoon animals. Skull hail. Brain rain. A severed, still-smoking ear.” The writing is taut and terrifying and contains moments of saccharine horror.

Bunny interrogates what it means to have a body with desires, and how far those bodies can take us. Awad artfully demonstrates what it’s like to attempt to be creative while drowning in the alienating and garish malaise that is being alive in our current cultural moment.