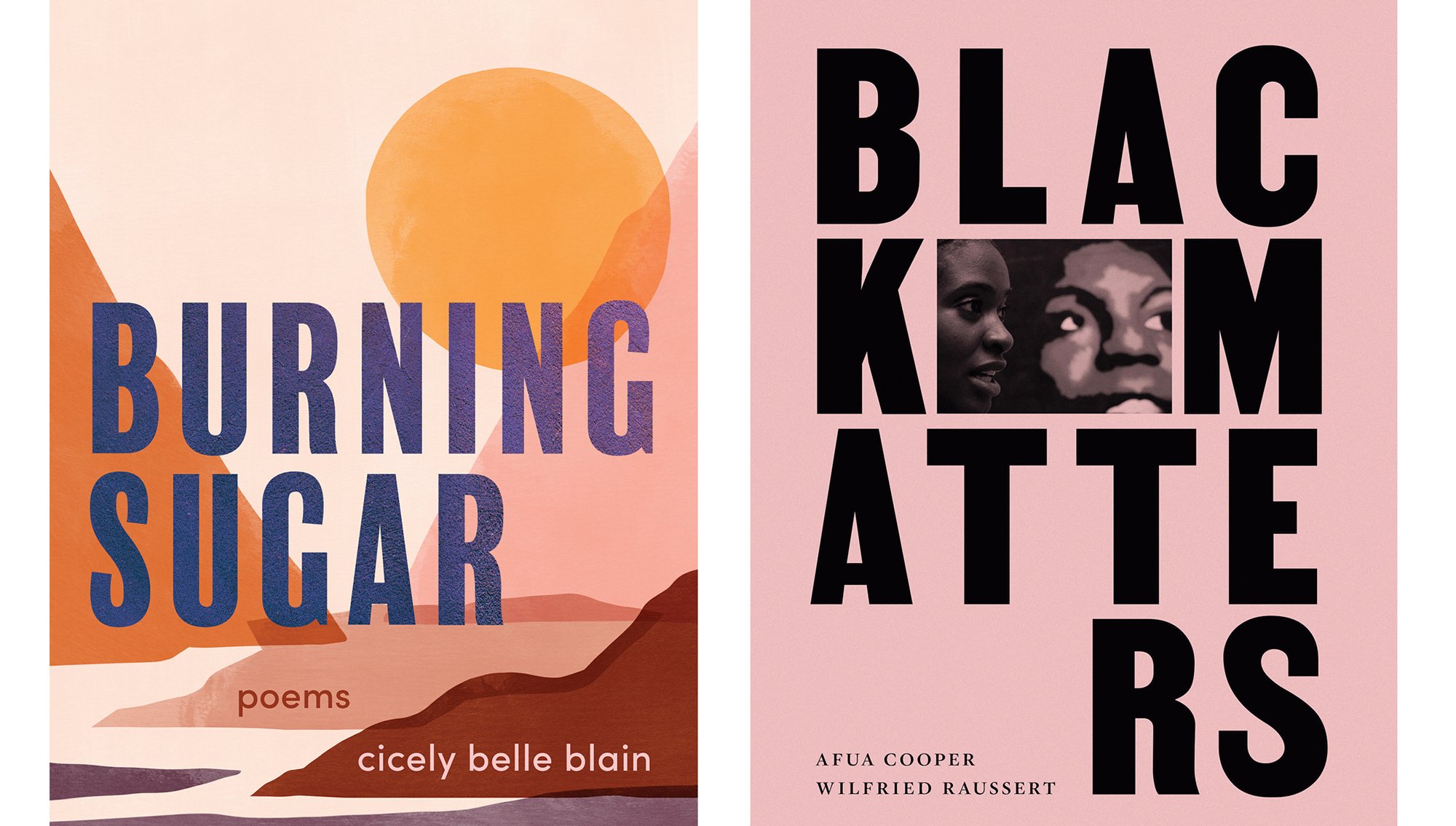 The world of Burning Sugar – the intimately powerful debut from Vancouver poet and activist Cicely Belle Blain – is, above all else, dynamic, always moving, tracing arcs and trajectories, modes of learning and loving. Through verse and epistolary writing, Blain explores the multiplicity of Black people and Black lives – pain, joy, hope, fear, longing, and sacrifice – from concentric perspectives: global, local, and personal.

The poems visit familiar spaces through travel, the speakers reminiscing, actively connecting, and challenging the worlds around them: “I found Black people between groves of wheat … some of us are still / on ships.” Location reveals history and these poems tell us Black people exist everywhere. The displacement and replanting at the heart of slavery persist as the poems move forward in time but Black people grow and blossom in new soils. There is both longing and contentment in diaspora, which Blain writes about in careful ways. Families, biological or chosen, may be spread across the world, with markedly different realities; Blain employs exploration and dialogue in an attempt to show how they may be commensurable.

Positive memories are constantly and simultaneously marred by reminders of oppression – a police appreciation day, a whipping post, or the pinpricks of neocolonialism – ensuring that, for some, violence continues to be remembered, while others insist on its erasure. The shadow and legacy of colonialism and its impact on Black people is a solid through line in Burning Sugar, a thematic handprint: “even the air we breathe has been colonized.”

While all this is going on, the poems showcase a personal and intimate navigation of the love friendship brings. Poems reveal an understanding of Toronto’s queer narratives, unique relationships the poet maintains with several towns and cities, and many external figures Blain calls out to in adoration, supplication, summary, or slight. Blain tracks a personal history of family, exploring a continued pattern of interpersonal harms, the ways environments and loved ones change as we age and learn, and the ways our unapologetic selves rise to the surface and spread out in love and grief.

Blain also dedicates space to engagement with Black art and artists through exhibitions of history and time that often echo the present, especially with regard to the intersecting paths of art and activism. “The stories of Black pain carve irreversible lines … There is love, too, though … occasionally hope, and always resilience.” Art provides a lens through which to connect with Black lives outside of oneself, while the speaker also recognizes the privilege inherent in being able to engage with art in the first place. Alongside poems about the fraught Black experience of artistic engagement – galleries filled with white people – letters addressed to artists express yearning, curiosity, and reflection.

Throughout the collection, Blain crafts and moulds clear and patient learning into their verse, alongside more searing and powerful analysis. Burning Sugar is a testament to tenderness, Blackness, and joy.

In former Halifax poet laureate Afua Cooper’s latest book, Black Matters, poems are paired alongside photography by Wilfried Raussert, creating a vibrant and complex dialogue between artists. At times, the ekphrastic collaboration works both ways, with poems commenting on images and vice versa.

Through rhythmic and appealing verse, Cooper ties the past to the present, reflecting deeply on the meanings and motifs of Raussert’s visual works in ways that are simultaneously realistic and imaginative. From a photograph of a Black man holding his child, Cooper summons John Ware, a Black Albertan cowboy. With a storyteller’s proficiency, she details Ware’s life and speculates on his family’s history and origins in ancient African kingdoms. In a separate poem, Jupiter Wise, a Prince Edward Island slave, makes an appearance. Cooper reimagines Jupiter not only as a runaway but also as a djinn – Black skin with a white mask. Canada’s colonial history of slavery is not forgotten in Black Matters.

Cooper’s words also highlight the joy of contemporary Black lives and narratives. A love letter to Cooper’s daughter appears alongside a photo depicting a mural of Nina Simone. The changing landscape of motherhood is truthfully crafted, including the longing to reunite as the miles between parent and child stretch: “We held hands across centuries / and trekked across continents.” Cooper’s lines are dipped in craft that both grounds them in space and time and lifts them into hope and beauty. Photographs of Black dancers evoke a similar dynamism in the poetry: “you dance with the wind … your body start rippling like a snake … you come to life again.” An undeniable positivity in Cooper’s writing is married to a timeless question: “What Do You Do with the Hurt?” Here and elsewhere, Cooper interrogates the ways Black peoples live alongside never-ending harm: “Do you drag it around like a bag and pan / or lead it around like a weeping child?”

Black Matters celebrates the power of Black art. Both Cooper’s collection and Burning Sugar cherish, centre, and empower the variety and vitality of Black lives.