★But I Live: Three Stories of Child Survivors of the Holocaust 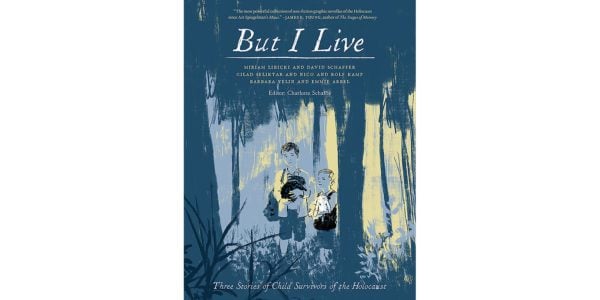 This is the rallying cry of the Holocaust remembrance movement. Yet Holocaust denial is widespread and global anti-Semitism is on the rise. There is an epidemic of both ignorance and disinformation about the murder of six million Jews by the Nazis during the Second World War, especially among young people.

The best weapon against hatred and disinformation is education, and there are no better teachers than witnesses. However, fewer and fewer Holocaust survivors are still alive. The superb, heart-rending book But I Live: Three Stories of Child Survivors of the Holocaust collects the testimonies of four survivors in a graphic narrative format for new generations. Three graphic novelists worked in collaboration with the survivors to create illustrated narratives of their individual experiences during the Holocaust. Historical context for the autobiographical accounts is provided by scholars, as are additional notes from the survivors. A glimpse into the process of creating the book and the art for each of its stories – presented, like the stories themselves, in illustrated format – is also included in this rich, multi-faceted title.

For “A Kind of Resistance,” David Schaffer partners with graphic artist Miriam Libicki, a fellow Vancouverite. In 1939, when David was eight, he was barred from school, the first sign of trouble for his Jewish community. His family was deported from their home in Romania to Transnistria in 1941, and left to starve until a Ukrainian family offered shelter in their summer kitchen. Later, the Schaffers took in another Jewish family, and they pooled resources and skills. David collected dry sticks and branches for firewood, which he bartered in the village for milk or bread. He scavenged for potatoes, wheat, and the sugar beets that fell out of a farmer’s cart. Having outgrown his shoes, David tied old rags with barbed wire to protect his feet. One day, he tripped and fell with a bundle of wood on his back, breaking his arm. Without proper care, it did not heal properly and to this day he cannot fully bend his arm. In 1944, the Schaffers were liberated by Russian forces. Today, after a successful career as an engineer, Schaffer lives with his wife and is blessed with nine grandchildren, all born in Canada.

As Schaffer tells his story, he notes, “I have a problem with the word resistance,” in the context of surviving the Holocaust. His family transgressed rules to survive: “Our survival was a resistance … Running away was resistance. Finding food was resistance. Living through the horror was resistance.”

Libicki’s bold drawings are saturated in tones of russet, indigo, gold, and rose. The family’s eyes are huge, expressive of their struggle and terror. But when crowded into the ghetto, the Jews become faceless dots of pointillist colour. In one of the most powerful illustrations, the family takes shelter in a dilapidated house with no doors or windows. The words “They are killing us” are scrawled on a wall in Hebrew, left behind by a murdered Jew. Libicki depicts the message in outsize burnt-sienna Hebrew characters above a pool of blood formed in the shape of a prostrate figure. 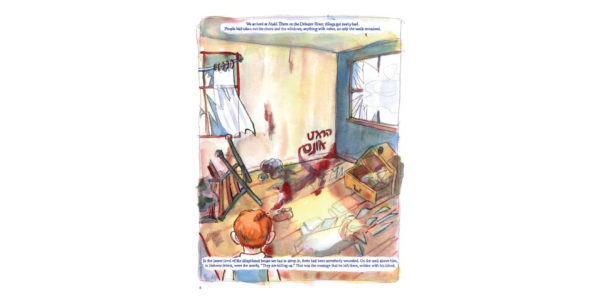 “Thirteen Secrets” is the story of German-born brothers Rolf and Nico Kamp, who hid from the Nazis in the Netherlands. Rolf was eight and Nico five when they were sent into hiding. The brothers took on new names, had to learn various local dialects. Their 13 hiding places – the secrets of the title – included a chicken coop and a farm owned by a family with 10 children, where several other Jews sought shelter as well.

After the war, Rolf and Nico’s mother returned from Auschwitz, but their father and grandparents were murdered in the camps. Today, the Kamps have children and grandchildren, and they visit schools as guest speakers, sharing their experiences during the war. Recently, Nico located the Traa family (now living in Winnipeg) who once sheltered the brothers on their farm, and the families renewed their friendship.

The brothers “reminded me of my grandparents,” says Israeli graphic artist Gilad Seliktar. “I interviewed them in a number of different places; each place brought out something different.” In addition to illustrating the Kamps’ history, he frames their story with drawings of their conversations in Amsterdam, bridging past and present – a technique used in all three narratives.

Though the brothers shared the same story, Seliktar gained two perspectives, which became a motif in the graphic narrative. In contrast to Libicki’s style, Seliktar’s striking, austere drawings are rendered in a spare palette of teal, slate blue, black, and washes of pale yellow. He deftly uses white space and black silhouettes for contrast. The technique emphasizes the sense of hiding and living in the shadows.

The title story of the collection is that of Emmie Arbel, created with Barbara Yelin, based on their conversations in Kiryat Tiv’on, Israel. Arbel was only four when she was herded to the Westerbork transit camp in the Netherlands with her family. First, her father was taken to the death camps. Then she, her mother, and two brothers were deported to Ravensbrück. She remembers the prisoners’ cries of anguish, the hunger, the fact that “death was among us every day.” She remembers trying to run away and being badly beaten, along with her mother. Arbel watched her mother die shortly after liberation, but does not know if or where she was buried. In 1946, she and her siblings were reunited in the Netherlands.

During their meeting, Arbel shows Yelin her mother’s sugar spoon, which she keeps on her kitchen table. “It was in our house. She touched it … and I touch it.” It is her one memento. In a haunting chorus, Arbel repeats “I don’t remember” during the conversations – and then she is flooded with memories from her childhood. To this day, Arbel only sleeps three hours a night, and in a public place must sit near the door with her back to the wall. Arbel lives with her family and works in a mental health clinic.

Yelin’s illustrations range from expansive, richly detailed, and colourful paintings to dark and sombre sketches of grey, black, and brown used to depict the camps. The variety of size, colour, texture, and detail in her art is distinctive. Some frames are simply translucent washes of colour to reflect that which Arbel cannot remember.

But I Live is a powerful and indispensable educational tool not just for high school students, for whom it was designed, but for anyone. Readers can now carry these indelible stories forward.