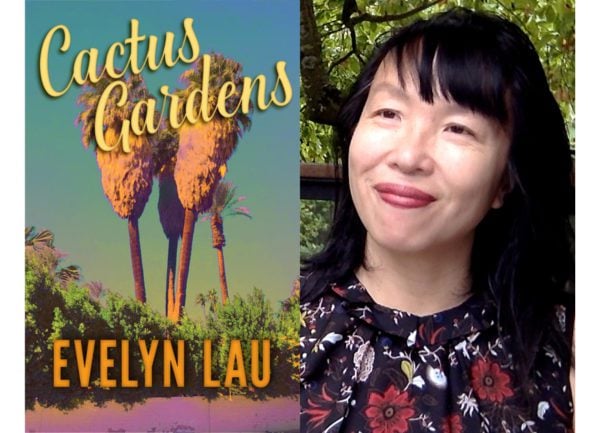 Cactus Gardens is the latest collection by award-winning author and former Vancouver poet laureate Evelyn Lau. Furthering her work of the last decade, the book is a testament to the craft inherent to confessional poetry and confirms Lau as a master of the genre.

The collection is divided into four parts that mark temporal and thematic shifts within the book. The first, “Summer Solstice,” echoes the work of the author’s recent collections, considering themes of transience, death, loss, depression, consumption, and decay in the banal everyday. The second, “the fewest hours of sunlight on record,” deepens this consideration as it turns to life in isolation during the initial months of the COVID-19 pandemic. “A Hundred Days” recounts the end of a long-term romantic relationship, while “The Salton Sea” explores an older romantic relationship upon the death of the speaker’s former lover.

Writing about this last relationship is not new territory for the author – in 1997, Lau published an essay about the end of a love affair that resulted in a lawsuit and national media attention. The most interesting aspect of this sequence is Lau’s use of voice and perspective. In addition to narrative lyric poems voiced in the first and second person (Lau has a penchant for writing poems where the speaker addresses herself as “you”), the author also speaks in the voice of the former lover in “Anger: ‘his’ abecedarian,” a poem that deploys to unsettling effect both the adopted persona and a poetic form often associated with writing for children.

Even though the description of the book highlights “The Salton Sea,” it is not the collection’s standout section, and many of the best poems are found elsewhere. However, Lau is a shockingly consistent poet – perspicacious, honest, and funny – and no one section rises above the rest. The book is a cohesive work of observational lyrics, attentive to the smallest details, often picking up on the slightest suggestions of disappointment or ugliness, even in lush, luxurious settings as in the poem “refraction”: “a fat koi like a slurp of cream / lurked in the lagoon. Bee-stung gardens bloomed, / so perfumed they elicited gasps for air, complaints — .”

A poet finely attuned to the “ordinary darkness” and “ordinary sadness” of our lives, Lau calls to mind classic confessional poets such as Anne Sexton; the poems in Cactus Gardens brim with just the right number of narrative details and feature a perspective on the world that is unflinching, though ultimately, not unkind. Her cocktail of honesty and empathy is particularly potent in the poems about friends and family, especially those lost to death and estrangement. In “Service,” the third in a series of poems on the death of a friend, she writes, “You shoved / a spoon into the butterscotch ripple, / twisted your face away. I watched you / and said goodbye to the possibility of grace, / that cracked space closing again — / we were human.” Here, as in the passage from “refraction” quoted above – and throughout the collection – her poetry is punctuated by a suggestive and considered, yet unfixed use of rhyme.

One of the book’s most striking qualities is its similarity in tone and themes to Lau’s previous collections, particularly the last four; since Living Under Plastic, published in 2010, Lau’s poetry titles could be read as one evolving volume. This is not a criticism – her steady work has resulted in exceptionally well-honed lyricism. Cactus Gardens should be welcomed as the crowning achievement of more than a decade’s impressive output.