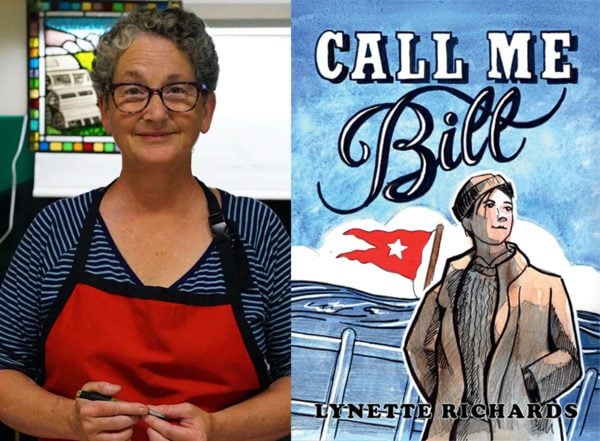 Expertly illustrated in black and white, Lynette Richards’s debut graphic novel tells a fictionalized version of the life of Maggie/Bill Armstrong, an adventurer who defied gender expectations in a quest to do what they loved. A sailor aboard the SS Atlantic, Armstrong reached their premature end when the vessel sank unexpectedly off the coast of Nova Scotia in 1873. Richards’s thoughtful, well-researched approach comes through in the respectful way the story is told; no assumptions are made about Maggie/Bill and how they identified.

The story starts with the tragedy of the ship sinking. Even before we meet the protagonist, we are dropped into a stormy Nova Scotia night as a small community witnesses the horrible sight of an ocean liner lying on its side. Human bodies are tossed by the waves. It’s a dramatic and affecting way of setting up the stakes of the story – after all, we know our protagonist is doomed within the first few pages. The narrative then shifts back in time to 19-year-old Maggie’s decision to leave their stifling childhood home in New Jersey. Tired of their stepmother’s prejudice, Maggie takes a suit from their father, adopts the name of “Bill,” and runs away to New York to find work. Eventually hired as a sailor on a boat, Armstrong takes to travelling around Europe until the crew discovers that their shipmate was born a woman, which leads to Armstrong’s immediate dismissal. Bill eventually finds their place on another ship, and Richards illustrates them standing victoriously in front of the Atlantic.

Richards’s writing is engaging and never preachy, making points about gender expression and identity that fit naturally within the adventure. Armstrong identifies as Bill when wearing “pantaloons,” but otherwise still goes by their birth name of Maggie. It is easy to see Armstrong as an inspiring model for teenagers that don’t want to conform to gender roles – Maggie/Bill is the type of person who will fight bullies but also muse poetically about nature, and still have time to chat kindly with children onboard the ship. When Bill boards the ship for its long journey, they “didn’t feel homesick…he’d never felt more at home than he did at that moment.” So while this isn’t a happy story, it does emphasize Armstrong’s bravery, kindness, and freedom.