Carrying It Forward: Essays from Kistahpinânihk 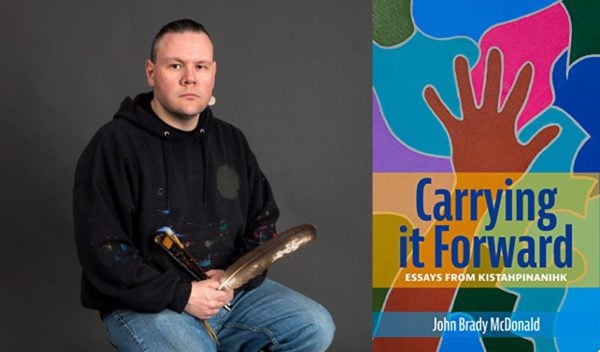 In this new collection of essays, readers will find personal observations, commentaries, and essays by a Nêhiyaw (Cree) and Métis warrior, Knowledge Carrier, and Otacimow (storyteller) who, as a child, was given the same moniker as the first Canadian prime minister. John Brady McDonald has compiled and expanded works he has written over the years – many of which were first shared on social media – in Carrying it Forward: Essays from Kistahpinânihk. (Translated from Cree into English, Kistahpinânihk refers to a place to gather or meet and in this context, it refers to Prince Albert, Saskatchewan, his home.)

McDonald has been a champion for Indigenous Peoples, combatting racism and discriminatory statements online, as well as sharing Indigenous teachings with humility, passion, and humour. Among the various issues discussed in the essays, McDonald relates personal stories, such as having to deal with sharing the almost identical name of the man who has been described as the architect of colonization and genocide in Canada (and how he finally changed his name) and the time he “discovered” and claimed England for the First Peoples from Turtle Island (the Americas). He shares powerful reflections on the 2018 Gerald Stanley verdict and on the lives of all Indigenous people victimized by colonization. The common thread and theme within the book, as he notes, is his consistent reference and return to his relations, his heritage, and his cultural identity.

One of the most poignant passages for me is when McDonald writes about the responsibility for reconciliation. He notes that Indigenous Peoples are not the ones who need to reconcile, rather those who have been deeply impacted by colonization are the ones that Canadians have to reconcile with. He emphasizes that true reconciliation will only be achieved when and if it includes everyone – unhoused folks, sex workers, those with addictions, the incarcerated, young people in gangs, as they are all victims of colonization. As individuals, and as a society, we must not forget this. McDonald further stresses that all allies and people in any position of power should support and uplift all Indigenous people and voices. If people are unwilling to do that work, then they should leave space for others who will.

The essays are written in a conversational, informative, and engaging tone. As I read, I felt as if I was sitting with an Elder or Knowledge Carrier as they shared their wisdom with me. Not for the faint of heart or those unwilling to look at the true colonialist history of Canada, the book is blunt, powerful, honest and heartbreaking, profound yet humorous. As an Indigenous person, I see my own experiences reflected in his words and read the entire book in one sitting. McDonald demonstrates Indigenous wisdom, resistance, and resilience on every page.