Chasing Bats and Tracking Rats: Urban Ecology, Community Science, and How We Share Our Cities 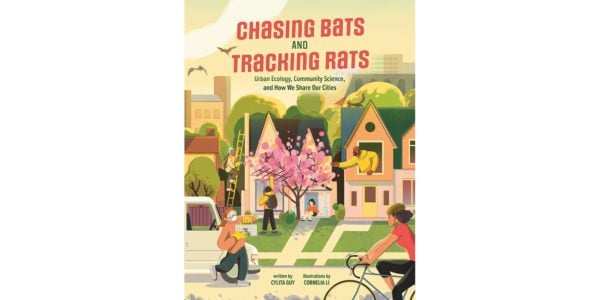 In her debut nonfiction children’s book, Chasing Bats and Tracking Rats: Urban Ecology, Community Science, and How We Share Our Cities, Toronto ecologist Cylita Guy encourages city kids to get outside, appreciate urban wildlife, and even collect data. Gripping and adventurous tales abound in a day – or night – in the life of the 11 passionate North American ecologists featured, three of whom are Black, one is from Wiikwemkoong First Nation.

Guy’s personal account about her bat research covers a near-death experience, followed by an encounter with a grumpy police officer. What are they doing in the park at 1 a.m., and what are those “squeaking lumps wiggling” under her sweater? Other chapters highlight intense and dangerous situations, including another late-night police interruption while scientists sedate a coyote on a picnic table and an angry woman who assumes that a Black scientist is suspicious, which leads to a discussion about racial bias and its impact on scientific research.

Each of the eight chapters ends with a challenge, a string of questions, and suggestions, prompting readers to learn more. Armed with a “trusty field notebook,” readers can record strange animal behaviours, sketch what they observe, learn the names of pollinators, and determine a squirrel’s “flight zone.” These call-to-action ideas would have been more accessible with a bulleted-list treatment. Instead, this section strays to extraneous – albeit quite interesting – details about the researchers.

Acclaimed illustrator Cornelia Li depicts interactions between ecologists and wildlife with richly coloured, mixed media artwork. The purple-and-orange palette featured in the image of Guy climbing a ladder to a rooftop, for example, amplifies shadow and form. The artwork is eye-catching, with attention to key details, such as protective equipment. However, scientific drawings aren’t labelled and there are no captions.

As many themes vie for attention – the wildlife, the scientists’ work, mind-boggling contraptions, and the backdrop of promoting inclusion and anti-racism – and sections unfold in a confusing manner that relegates important content to the sidebars, readers may find the information difficult to follow. Extracting clear answers to the general questions posed in chapter titles (“How much does wildlife rely on city green spaces?”) requires flipping back, rereading, and pondering.