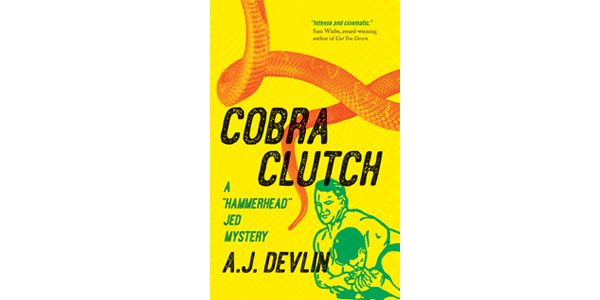 If professional wrestling is over the top, it’s not a stretch to assume that a novel set on the fringes of a western Canadian wrestling circuit would be, too. In that respect, A.J. Devlin’s debut doesn’t disappoint.

Former wrestler, current bouncer, and amateur unlicensed private investigator “Hammerhead” Jed Ounstead is hired by his wrestler friend Johnny Mamba to find out who kidnapped the latter’s pet snake, Ginger. But when Johnny and Ginger both turn up dead, it’s up to Ounstead to find out who the “heels” are behind the crimes. There are plenty of suspects, from Johnny’s wrestler ex-girlfriend Stormy Daze to the shady circuit owner Bert Grasby and his goons.

Former IRA member Declan St. James is Jed’s cousin. Now a cheerful barkeep at the Irish pub owned by Jed’s ex-cop father, Declan likes his pints o’ Guinness and, evidently, talking like the cartoon character on the Lucky Charms cereal box: “Top o’ the mornin’ to you, princess. … We got right scuttered last night, didn’t we, mate? I’m telling you, that 18-year-old Glenfiddich is the shite.”

Jed himself harbours a terrible secret surrounding the reason he quit the squared circle, calls everyone “bub,” and has a constant hankering for banana milkshakes from Dairy Queen. Rya, a detective and former partner of Jed’s dad, fills the role of the patient woman who, despite being an all-star cop, is constantly out-played by the unlicensed amateur.

There are some high-pitched violent action sequences, daring escapes, and a thrilling climax on Vancouver’s Lions Gate Bridge, but the characters and dialogue need some work. Women in general don’t fare well in Devlin’s novel, being variously referred to as “the ditzy blonde,” “trollops,” “sluts,” and “tired cougars.” In its ham-fisted attempts to be hardboiled, Cobra Clutch occasionally comes off half-baked, but is a somewhat entertaining example of nouveau pulp.