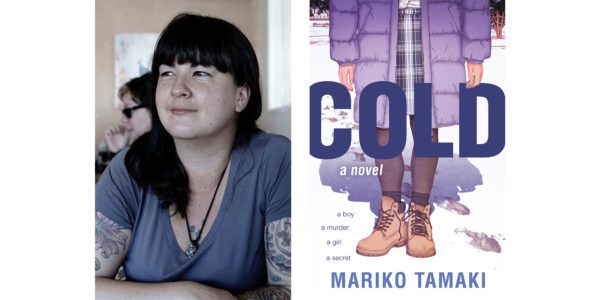 Mariko Tamaki’s Cold begins as a murder mystery, but from the moment Todd’s ghost lays eyes upon his own body, he remembers being bullied by his classmates and the story’s melancholic undercurrent becomes clear. Despite Tamaki’s light touch and wry humour, Cold can be a difficult, disquieting read – one that prompts readers to reflect on experiences of cruelty and on their own thoughtless complicity in inflicting it on others.

The story unfolds from the perspectives of two characters: Todd’s ghost, who follows the detectives’ investigation into his final hours, and Georgia, who doesn’t know Todd at all yet feels compelled to solve his murder. Queer experiences are central themes in the novel, as both Georgia and Todd encounter homophobic bullies, and Mr. McVeeter (a teacher who befriends Todd) has to cultivate an eccentric persona to protect himself from similar taunts. But there are also examples of queer joy: Georgia explores a possible romance with her friend Carrie in a sweet scene involving gum. And Detective Daniels comes home to the heartwarming sight of his boyfriend pantsless and dancing while baking a pie; their hug is a welcome moment of comfort in an otherwise gut-wrenching chapter.

Ultimately, Cold is about stories: the ones we tell about ourselves and the ones others tell about us. The investigation into Todd’s murder is troubling because practically no one in Todd’s life knew anything about him. His ghost often reflects on how characters miss bits of the truth, and the harsh reality of his death means his story is wholly in the hands of others. Georgia knows all too well how that feels; her mother writes children’s books and models her characters after her children.

Though Georgia’s investigation into Todd’s murder is yet another example of his story being told by someone who doesn’t know him, there’s an earnestness to Georgia’s quest, a genuine desire to make sure the truth about Todd’s death is known. Some measure of catharsis is achieved in the final chapter at the mausoleum, where Georgia tells Todd she’s moving on but promises never to forget him.

It’s not a happy ending; Todd’s still dead, he will still never get the chance to kiss someone he loves. And the truth behind his death is both depressing and disturbing. Georgia’s words do provide some comfort, and the novel does close on a hopeful note: Todd’s story may have ended, but Georgia’s is just beginning.