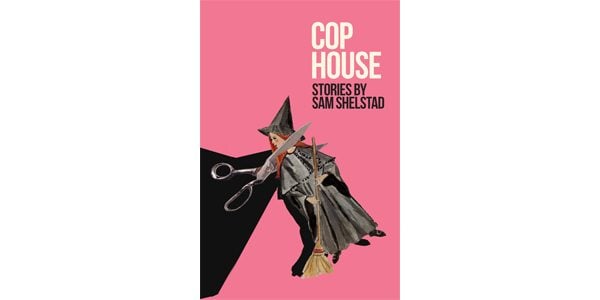 Toronto author Sam Shelstad possesses the ability to charm readers with his vivacity, even – perhaps especially – when it comes to characters or situations that might be considered a tad unsavory. The bulk of the stories in Cop House illuminate the meagre hopes and shattered dreams of spurned husbands and lifetime spinsters, people who work at call centres and drug stores and fast-food joints: that oft-ignored set known as the lower middle class.

The majority of the stories in Shelstad’s debut collection have been previously published in well-regarded journals, and the title story was the runner-up for the 2014 Thomas Morton Memorial Prize. In “Cop House,” the narrator’s biggest goal in life is to win her neighbourhood’s Halloween home-decoration contest. The grand prize is a bucket of candy from Costco, though, according to Ruth, the story’s narrator, “it’s more about the prestige.” After neighbourhood teenagers repeatedly vandalize her decorations, Ruth reflects, “Would my life improve dramatically if I won the bucket? No it would not. I would still work at the drugstore and live amongst teenage arsonists and be lonely all the time. My pillow would still smell like tears every morning, if tears left a smell.”

The protagonist of “Sketch Artist, Boxer, Party Planner, Baker,” a sad-sack whose (presumably unpublished) self-help book comprises four coping stages represented by the professions in the story’s title, gets booted out of the house when his wife discovers his obsession with her older sister. The story follows the disgraced husband, on a Greyhound travelling to his mother’s house in Sudbury, as he concocts ridiculous scenarios to explain himself to his wife in the hopes of winning her back. In “The Fiddler Murders,” another standout, a married couple takes an underwhelming trip from Windsor, Ontario, to Niagara-on-the-Lake. The highlight – for both of them – comes when the constipated husband finally experiences a successful bowel movement.

Shelstad’s empathetic lens is not limited to humans. Two of his more stylistically inventive stories are told from the perspective of animals. The over-the-top masochism of “This Deer Won’t Look Both Ways” manages to be both hilarious and horrifying, and the truncated first-person voice of the exiled polar bear in “New Ice Kingdom” reads like something out of George Saunders. It is precisely this blend of humour and pathos that give Shelstad’s stories their disarming power.