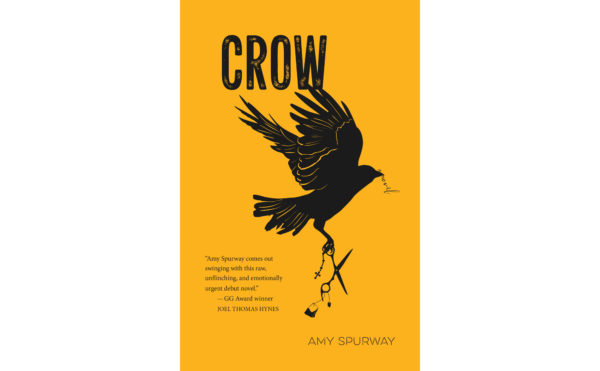 Stacey Fortune, nicknamed “Crow,” neatly encapsulates the trajectory of Nova Scotian author Amy Spurway’s debut novel early on: “Girl gets tumours, girl loses mind, girl dies, the end.” But the novel is actually about a lot more than that. Some unnecessarily complex plot manoeuvres aside, Crow is a promising debut that resonates emotionally, brims with humour, and deftly tackles some very complex thematic territory, such as the transition from life to death and the chasm between the rich and poor.

Spurway – whose other credits include work in the Toronto Star and Today’s Parent, as well as a gig as a CBC commentator (at age 10!) – shares aspects in common with Crow’s antihero. Both are Cape Bretoners who left Nova Scotia for Toronto but eventually came home. In Crow’s case, to die, thanks to three inoperable brain tumours.

As the novel opens, Crow has just arrived on the island, ready to live out her last days in a small trailer in the sticks, alongside her ineffably foul-mouthed, yet loving, mother, Effie. The reader meets Peggy, Crow’s nosy aunt; Char and Allie, her troubled friends who despise one another; and Willy, her high-school rebound fuck. As these reunions transpire, Crow still wonders about her paternity; Smart Alec Spenser, from a wealthy family, is reputed to have sired her but disappeared when she was born.

Spurway’s use of language is skilful, making the novel highly readable. Crow is ribald, blunt, accessible, and immediately likeable, tumours and all. The novel’s argot will introduce readers to (or remind them of) many rich and colourful expressions that add potent, effective humour to what is nevertheless a rather heart-wrenching story.

The author’s choice of first-person interior perspective makes sense for a book so intimate, but in a narrative that requires so much backstory to understand, it feels like there is a significant degree of explication – things told not shown. All Spurway’s characters have been richly drawn, but there could have been fewer of them. In the final third of the book, so many secrets are revealed about so many characters to explain why they are the way they are that it creates cognitive overload.

But it’s still an enthralling, passionate, inspired read. You know how people say, “You’ll laugh, you’ll cry”? You will. And you will.