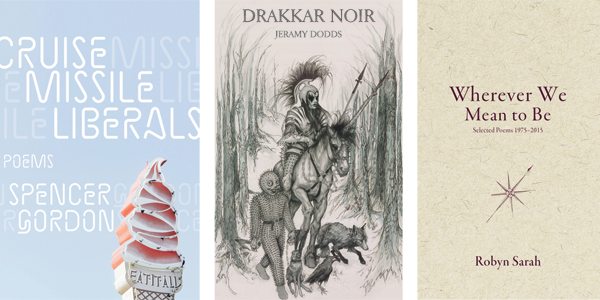 Spencer Gordon’s debut book of poetry, Cruise Missile Liberals, opens with the speaker admiring an X-ray’s clarity of purpose, and closes with a desire to be like the enduring trees, which never need a “wake to drink at.” Gordon’s collection is about being located uncomfortably between machine and nature, and what it means to be citizens in an unjust world.

Cruise Missile Liberals covers a wide range of terrain, from the poetry community to class issues to governmental policies to the lyrics of Taylor Swift and Avril Lavigne. Gordon employs the vocabulary of pop culture (for example, hashtags) in a way that is never decorative, but always demonstrative. Inundated and mediated, these poems refuse to look away from our cultural glut, and this provides for some caustic social commentary.

Gordon’s attunement also results at times in despair. The answer to  “What’s on Your Mind?” takes the form of a litany: “An admission of sincere emotional fatigue. A plea / for more patience. A transmission of love for whoever / needs it. The ultimate in party shirts, now on clearance.” The first three sentences are earnest, while the last one almost sounds like the poet parroting advertising copy. But Gordon is capable of shifting into Biblical pathos just as deftly: “Wind – mere wind – snatched up Job’s children.”

Cruise Missile Liberals is a complex and accomplished first collection from a writer who has honed his voice by listening. Gordon’s examination of the self in late capitalism is not always optimistic but is, in its humanity, enormously affirming.

If Gordon’s book is firmly embedded in the modern world, Jeramy Dodds’s sophomore collection, Drakkar Noir, creates an impossible world, located nowhere and everywhere. Poems take place in the city, the country, on a farm, in a castle, on tropical beaches, at the mall, and elsewhere. Much of the imagery involves the air and bodies in motion. There are consistent mentions of the sun, candles and wax, angels, windows and mirrors, and automobiles. The cumulative effect is of an Icarus-like figure going too high, too far, too fast. At the same time, this book is also populated with bodily imagery (rashes or acne, for example) and a pantheon of almost mythic animals. In this impossible world, there is no such thing as too much.

Dodds has long been recognized for his imagistic leaps, wordplay, and attention to the sonic qualities of poetry. These facilities are all on display here, enhanced in a number of longer poems (“What Pa Saw”; “Trevor Finlayson for Jeffrey Connors”; “The Swan with Two Necks”), in which the syncopated musicality receives sustained treatment.

One of the most interesting motifs of the book is possession – the speaker refers to “my wife,” “my daughter,” “my child,” “my dolphin,” and so on. This is interesting because the finest poems centre on lack of ownership and estrangement. In “Formica Crick,” Dodds asks, touchingly, “What do you call / a trapezist who doesn’t reach out for you?” In “Three on the Tree and Fifth Under the Seat,” he laments, “Making love to you was like / sheriffing a town that’s already burnt down.” There are poems about feeling small while being awed by the sea’s grandeur (“Scapa Flow”; “Harbour Porpoise”). Even Dodds’s opus, “Canadæ,” which occupies the centre of the book, is about a desire to change the nature of a fundamental relationship: “Canada, this is a teleprompted / love song, a ghostwritten Dear John.”

Eschewing Gordon’s of-the-moment commentary and Dodds’s sacred-and-profane surrealism, Robyn Sarah declines to traffic in the pyrotechnics of syntax. The ambition inherent in her work has always involved the use of direct speech to build up meaning by way of gentle washes. Wherever We Mean to Be contains poems spanning 1975 through 2015, including a number of selections from her most recent collection, the 2015 Governor General’s Literary Award winner, My Shoes Are Killing Me.

Sarah has a gift for detail, and many of these poems engage with memory. They address maturing, parenting, and the dichotomy of cosmic time versus a single life. “Maintenance” illustrates the friction between the ethereal and the quotidian in its description of being called away from writing by the mundane demands of the day: “to call this compensation, is to demean. / The planes are separate.”

For the most part, Sarah writes in her own forms, and does so with a musicality that feels informed by classical composition more than contemporary music – she’s concerned with melody over hook. One form she returns to with élan is the villanelle; in “Villanelle for a Cool April” she writes, “I like to watch the shadows pack their tents / before the creep of the advancing sun.”

Sarah’s style aims for the sublime through subtlety, and for the universal through the specific. The final poem, “An Infrequent Flyer Looks Down,” captures an underlying theme: “Not a bead of thought today, / nothing but doubt. // What is worth wanting?”