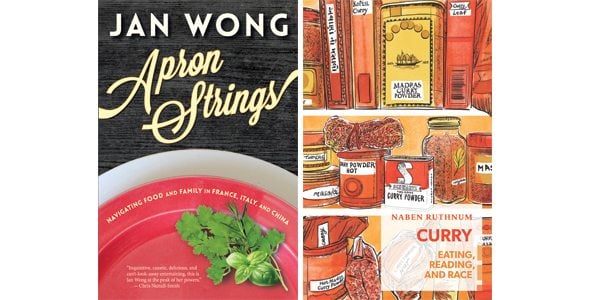 In her newest book, St. Thomas University journalism professor and former Globe and Mail columnist Jan Wong attempts to recreate the success of travelogue memoirs like Elizabeth Gilbert’s Eat, Pray, Love – taking herself, along with her son, to various foreign locales in search of authenticity in food and culture. Unfortunately, Apron Strings: Navigating Food and Family in France, Italy, and China lacks any distinguishable narrative arc and relies too much on meaningless details and meandering detours.

Reduction is a good thing in the kitchen, but for a food memoir, Wong’s reductive and prescriptive views – her hatred of vegetarians and vegans; unkind descriptors of women’s bodies and physical appearances; and hyperbolic claims (“I have never exfoliated, which has always sounded to me like some form of ISIS torture”) – are boring at best, offensive at worst.

The glimmers of hope in Apron Strings occur in passages that feature Wong mediating on her family and upbringing; the book would be better with more of these. In a particularly charming passage, Wong recounts her first run-in with al dente noodles as an adolescent: “I was a shy teenager, but I wanted to stand up at my table and scream: Wowza!” These glimpses into Wong’s life outshine those moments in which she surmises about the lives of her hosts in foreign lands, which feel like pages stripped from a gossip mag.

Detours in Apron Strings include trips to a shoe museum and descriptions of the real estate Wong’s hosts are considering buying. These are distractions from the book’s stated premise of exploring globalization’s effect on food cultures. Extraneous details weigh the story down and render the reader bored, unable to concentrate on the more interesting material about a mother and son travelling and cooking together. A more focused approach would have benefited Wong here, and allowed the reader to follow her travels without questioning the route she is taking to get to her destination.

Naben Ruthnum’s Curry: Eating, Reading, and Race could be seen as directly rebutting Wong’s Apron Strings, since in many ways Wong’s travel memoir is exactly the kind of text Ruthnum is applying a critical eye to. Take, for example, Ruthnum’s assessment of writers who travel to France and Europe to write about food: “A great portion of [M.F.K.] Fisher’s and Elizabeth David’s writing deals with food and food experiences in France and continental Europe, an ongoing suggestion to readers that real food was something that existed elsewhere, not in the country of the writer’s origin.”

Ruthnum’s essay analyzes and dismantles food narratives that depend too heavily on the search for authenticity and played-out tropes, but instead of outright dismissing what Ruthnum refers to as “currybooks,” the author is intent on uncovering the motivations behind them. Why do so many books contain the same element of a homecoming to South Asia and the food that is emblematic of the return? Why do so many writers pen them, and why are they so popular?

Using curry as a metaphor for diasporic South Asian culture, Ruthnum presents recent examples of currybooks for analysis, along with other cultural artifacts offered for consideration. These range from high to lowbrow, including references to Scaachi Koul’s essay “There’s No Recipe for Growing Up,” Gordon Ramsay’s TV show Kitchen Nightmares, the movie Harold & Kumar Go to White Castle, Zadie Smith’s novel White Teeth, and, once again, Eat, Pray, Love. Ruthnum keeps his reader entertained while at the same time showing off serious critical chops to back up his claims.

Throughout the essay, Ruthnum scatters moments of nostalgia for his childhood as a first-generation Mauritian-Canadian in Kelowna, B.C., but it isn’t until the end that he inserts himself completely into the text. Here we gain insight into the reason this book was so important for him to write: “Nostalgia is inextricable from a story about leaving the homeland, which means my story is open to the same kind of interpretive lens I’ve put on work by South Asian writers throughout this book.”

Reading Curry feels like taking a journey with Ruthnum as he works out his complicated responses to these questions, and there’s no tidy conclusion. The reader is forced to think through the issues at hand and re-evaluate their own relationship to food and literature. Spot on, scathing, and often humorous, Ruthnum’s prose has a strong sense of voice that is unlike anything produced lately.