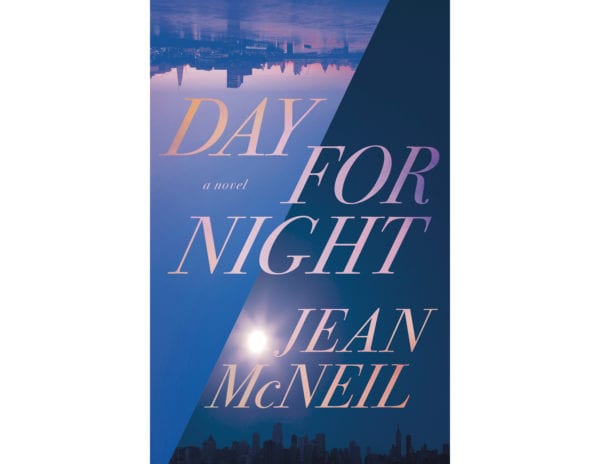 It’s never easy to examine why we love whom we love and what happens when that love changes – or is transferred. Nor is it easy to live with ghosts of any kind hooked over your shoulder, watching your every move. Jean McNeil’s Day for Night takes these subjects and dissects them with a delicate hand, language that sings, and a critical eye that appreciates beauty in both its glory and wretchedness.

Somewhat reminiscent of Lauren Groff’s Fates and Furies, although much less fraught, Day for Night is told from the perspectives of a husband and wife and weaves together narratives within narratives. Through the eyes of Richard Cottar, a British film writer and director, we see the emotional fallout of the Brexit vote alongside glimpses of the life story of his new film’s subject: Walter Benjamin, a German-Jewish literary critic, essayist, and philosopher living in Germany and subsequently other parts of Europe during the turbulent years prior to the Second World War. Richard and his producer wife, Joanna, believe Brexit will be of similar magnitude to the displacement seen during those wars; they worry about having to leave Britain, having to pack into trains, having to bid everything they know goodbye at the drop of a hat. Walter is that ghost hovering over Richard’s shoulder, reminding him of the what-could-be, of the true horror of human displacement that occurs when people have no other choice.

Are the Cottars being flip, comparing their situation to a migrant crisis, a terrible war, a man who died by suicide after being told he would be deported back to France, to likely repatriation to the Nazis? That’s a decision readers have to make for themselves.

And then Richard meets his second ghost: Elliott, the leading man for his new film and someone who creates a displacement in Richard’s heart, and eventually in Joanna’s heart and life as well – albeit not necessarily in the way we might predict.

McNeil’s writing is spare and lush at the same time; she doesn’t coddle her readers, making us pause to look up places, names, people, publications, and historical references in order to keep up with the braided storylines and fully understand the depth of layers she’s welding together. She examines situations with diamond-bright clarity, staging each movement, each bob of a head and twitch of a hand, with such awkward, excited realness that we’re there, in the moment, in the room. In the bed.

Day for night refers to cinematic techniques used to simulate a night scene filmed during daylight. Day for Night the book invites us to look at our darkness and how we can channel it into something that at least mimics lightness to the world watching. McNeil gives us difficult questions to mull: What is happiness? What is fulfillment? What are you willing to look away from, and what do you have to stare at head-on? There are no easy or ready answers to those questions, but perhaps the novel is instead inviting us to experience the night so we might appreciate the day or, more importantly, see the purpose of the dark.