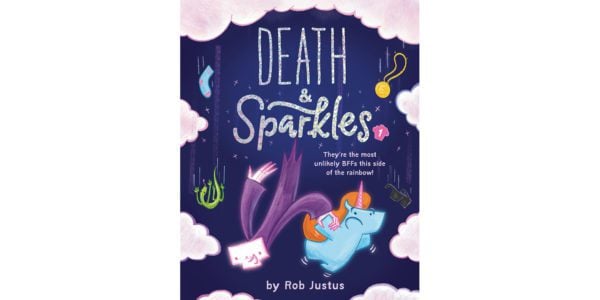 Rob Justus’s latest graphic novel is about Sparkles, universally famous and adored, and Death, loathed by humankind. When Death arrives at a bustling metropolis to claim the soul of Sparkles, the last unicorn, an adventure begins.

Sparkles is a hot commodity, with everyone vying for a selfie or peek at the last unicorn on earth. He’s enjoyed a glamorous life in the limelight with the help of his malevolent agent, who capitalizes on Sparkles’s rarity every chance he gets – be it promotions, sponsorships, or television appearances.

The agent has just booked Sparkles for his latest televised stunt, which involves riding a chariot over a “little” roller coaster jump to throw socks at adoring fans below. As per universal decree, Death arrives midway through the performance – when a sudden blast creates a gaping hole in the chariot – and notifies Sparkles that his time has come to an end. The last unicorn’s parachute fails to launch, and the A-lister is sent plummeting to earth in a fittingly dramatic demise. But things don’t go as planned. When Sparkles ends up in the caverns of purgatory, the sage dragon and guarder of Paradise’s pearly gates tells Sparkles that he is not yet ready to enter the ethereal plains – not until he realizes his noble species’ true calling and transcends the traps of vanity and ego. And so the unicorn is sent hurtling back to where he last left off, with his horn stuck to Death’s rear end.

Together, the pair navigates life’s many philosophical conundrums and hot-button issues, be it the climate crisis or the elusive nature of fame. Death and Sparkles eventually realize that fame is fleeting and true friendships need no audience.

Rob Justus’s illustrations are beautifully rendered with soft outlines and rich pastel colours. The visuals are reminiscent of many beginner and early reader books, with scenery and character depictions that are fun and well imagined. Each panel is beautifully shaded and transitions seamlessly to the next, giving the book the momentum and strong visual appeal integral to the graphic novel medium.

While the book is marketed for a middle-grade audience, and touted as perfect for reluctant readers, it references issues that adults would better appreciate, such as the drudgery of bureaucracy – enough to burden Death himself – bromances, celebrity influencers, commercialism, and the unquenchable thirst for fame with all its moral downfalls. Death & Sparkles seems better suited for teens and adults. Many great books, such as Everyone’s a Aliebn When Ur a Aliebn Too by Jonny Sun, found in adult fiction, rely on cute characterizations and simple dialogue to explore deeper themes and age-old quandaries; Death & Sparkles seems to fall into this category.

While the underlying messages of holding true to one’s values and authentic friendships are nice, they feel lost under layers of over-the-top lingo and disjointed plotlines attempting to reference every topical issue at once. Ultimately, Death & Sparkles becomes a series of quips about humanity’s many vices and hedonistic pursuits rather than a directional storyline. The visuals serve as the focal point, carrying cohesiveness and thrust, but in the author’s attempt to make the text as sparkly as the illustrations, the content becomes too much, and the messages are lost in the process.