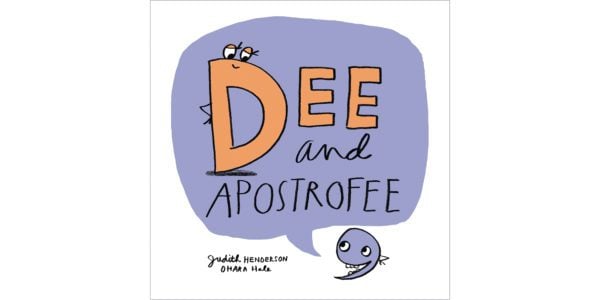 As everyone knows, Aug. 15 is International Apostrophe Day, an occasion the internet celebrates by shaming the apostrophe’s most egregious abusers. Small businesses tend to be easy targets, often for misplaced or redundant possessives (“Open Sunday’s”), but multinationals aren’t immune: “Great taste deserves it’s own reward,” declared one Starbucks poster.

Parents who fear their child might suffer a similar ignominy on future International Apostrophe Days will want them introduced to the rules early. That, presumably, was Judith Henderson’s intent in writing her latest picture book, Dee and Apostrofee. Regrettably, these laudable intentions are consistently undermined by poor execution, resulting in a book that often confuses more than it clarifies.

The title characters seem to suffer from unique forms of narcissism: Dee (as in the letter) “thinks the best words start with her,” while Apostrofee “thinks a lot of himself – mostly because he does a lot. Like, he makes words shorter.” Apostrofee’s tendency to devour vowels has the letters of the alphabet, especially vowels, in a state of high anxiety, with Dee calling Apostrofee a thief. Apostrofee’s defence is multifold: he’s making words “more economical,” he’s bringing them together in “peace ’n’ harmony,” and he also enables people to “own” things. The appeal to proprietorship seems to strike a chord with the letters, and they decide to invite Apostrofee to a peacemaking dinner; the ensuing truce is subtly solidified by F, who starts using contractions in her speech.

Cutesiness and gas jokes – Apostrofee, who resembles a toothy Pac-Man, keeps burping up the Os he’s eating – aren’t enough to offset Henderson’s scattershot and at times bewildering approach. In the book’s opening pages, for instance, Apostrofee uses two non-words – “d’lighted” and “d’lish” – as proof of his prowess. And while Apostrofee’s claim that he’s “bringin’ words together” makes sense with examples like “I’m,” it sits awkwardly with more complex constructions like “couldn’t/wouldn’t/shouldn’t.” That said, the most grating thing about Dee and Apostrofee is the inexplicable misspelling of apostrophe – which isn’t even a play on words – a profound irony in a book aimed at heading off language errors before they happen.