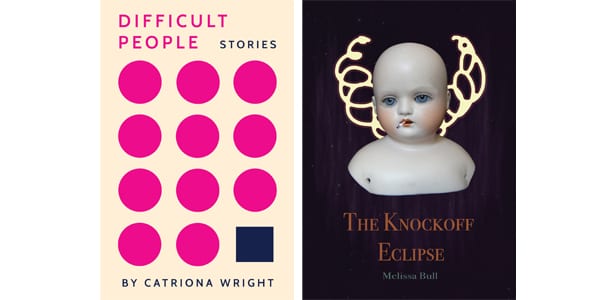 The first story in Catriona Wright’s debut collection, Difficult People, features a failed academic who has found herself working as a content moderator for an internet company. As an academic, she studied chronology in Alice Munro’s stories; her new job entails watching reams of gore, mutilation, pedophilia, and death and flagging videos that contravene the site’s terms of service. To cope with the second-hand trauma of her job, she goes home and drinks. “I envisioned a life suffused with a sense of purpose and meaning and resolved to start anew, only to wake the next morning on the couch, hungover and overwhelmed by the immense effort such a change would require, those alternate selves dissolving in the sunlight.”

“Content Moderator” sets the tone for the rest of the collection: the protagonists find themselves in acutely uncomfortable situations that range from commonplace (the death of a loved one, an absent parent, sexual assault) to more fantastical (micro-processors placed in the brain render women infertile). In this respect, Difficult Situations would have been a better title for this collection – though Wright’s people are distinctly unpleasant. There’s no rule that short stories have to be happy, sympathetic, or realistic, but Wright’s stories are often overwrought, ending up isolating the reader.

Wright’s prose is accessible and fast paced, allowing the reader to move through the stories rapidly. The experience of reading the book is akin to listening to a murder podcast or watching a tragedy unfold on the evening news: you want to look away but feel compelled to keep paying attention. Reading Wright’s stories feels like self-flagellation or, at the very least, indulging in a dose of schadenfreude. The highlight of the book is “Uncle Harris,” which skilfully captures the despair of an absent parent and the strife of having someone else fill the missing person’s role. “When I got home I found Dad sitting in the living room, Gavin and Bill cross-legged at his feet. But when I got closer, I saw that it wasn’t Dad at all.”

There’s a danger in referencing Alice Munro in the opening pages of a short-story collection: the reader can’t help but compare what follows to Munro’s subtle narratives and flawless prose. Munro perfectly captures regular people in perfectly normal circumstances, a task more painstaking than portraying outlandish characters in unconventional situations. Wright’s short stories land flat in their oddness, not giving the reader enough “realism” to grasp on to; the result is a series of one-dimensional narratives.

It has become something of a trend in Canadian short stories to exaggerate the confines of everyday life as a means of pushing characters to a breaking point. Canadian short stories have tilted toward a kind of “oddity realism” that amplifies weirdness as a means of capturing the peculiarities of the Canadian experience – Deborah Willis’s 2017 collection The Dark and Other Love Stories is one successful example. Melissa Bull’s debut story collection, The Knockoff Eclipse, sometimes strays into this mode but the strongest stories stick to the ordinariness of the everyday. The entries in The Knockoff Eclipse are shorter than most short stories; they frequently begin in medias res and do not resolve into a tidy conclusion.

The stories in Bull’s collection are rooted in the Québécois experience, many of them intertwining French dialogue with the English text, though the author employs restraint in this regard as a means of making sure the unilingual reader doesn’t get lost. In “Downpour,” a meditation about rain, Bull writes, “My mother and I used to call big tear-shaped raindrops des p’tits monsieurs because they looked like tiny men jumping in and out of puddles. And now I’m getting a memory from when I was about three and my mother had her store and I was in her arms eating a peanut butter and banana sandwich.”

Bull’s stories are strongest in their descriptive aspects. “Beers bobbed in a cooler of melted ice by the fridge, I grabbed one. The bottle was wet but still relatively cool. I put it against my forehead for a moment, then tucked my hand into the bottom of my skirt to twist off the cap. I couldn’t see a garbage bin so I put the cap into my purse.” Mannerisms that are so commonplace they often go unnoticed anchor the stories and offer a sense of familiarity.

By capturing recognizable glimpses of relatable situations, Bull’s stories root themselves in reality, which is especially useful when they venture into the supernatural. In the title story, the setting is distinctly contemporary: a gentrified dive bar, the streets of Montreal, the dingy apartment that is the site of a one-night-stand. But something is off: the bar patrons’ clothes flash messages and provide warmth. Wendy, the woman that Henry goes home with, has shaved all the hair off her body including her eyebrows. Henry refers to her as “alien girl.” The story introduces more questions than answers, disorienting the reader with a world that seems similar to ours but isn’t. Bull’s stories never have pat endings, adding an extra layer that enriches the collection.