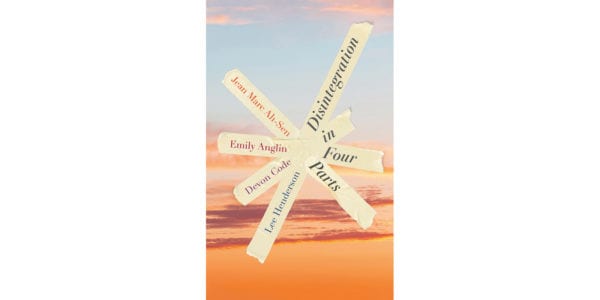 The novellas that make up Disintegration in Four Parts connect to the concept of purity, which, like this book, defies immediate, steady categorization. Rather than relying upon the theme as a plot device, each of the writers approach purity at an engaging slant, through fractures in connection, representation, and memory.

Lee Henderson’s “Merz in the Arctic Circle” uses the historical framework of Dada artist Kurt Schwitters’s internment in Nazi-occupied Norway. (Schwitters’s abstract collage work was displayed in the Nazis’ “degenerate art” exhibitions.) As those around him process their terrifying situation, Schwitters journals in poetry, performs songs, sketches the landscape, and speculates about an unsettling fellow internee. Schwitters, despite the circumstances, still seeks to make his Dadaist art. This rather pure devotion sustains him and sets off a shocking, beautifully rendered turn in Henderson’s story.

The collection’s epigraph, “All purity is created through resemblance and disavowal,” speaks strongly to Emily Anglin’s “Dissolving Views.” As the protagonist disappears into an opaque, toxic relationship – prompted, in part, by her own creative work – her twin sister maps a similarly divergent and isolating path. Both women find themselves remaking magic lantern shows, like those introduced to them by their mother: “Scenes disappeared and were replaced by new ones. … The phantasmagoria was different. Secretive, ritualistic.” The dark parallels between the sisters’ urges and experiences “merge into each other.”

In “Parametrics of Purity,” Jean Marc Ah-Sen writes a sidelong view of a relationship between two writers in competing influential literary movements. Ah-Sen grapples with mind-bending ideas around mimesis and builds a detailed chronicle of fictive literary styles, theories, and analyses. In reckoning with textual modes that are not real, might this be a pure form of literary theory? Within his playful, heightened diction, Ah-Sen offers cutting insights: “There was nothing automatic about the act of writing. … the utility of the act lay not in producing pleasure but in withholding discomfort.”

Structured like Ludwig Wittgenstein’s Tractatus Logico-Philosophicus, Devon Code’s “The Green Notebook” is composed of philosophical propositions spliced with childhood recollections, which shift in scope as the narrator, nearing the end of her life, deteriorates. Code manages to provoke tenderness, even through the distanced pronoun one: “One lies prone on the hardwood floor, considering one’s state of affairs.” Illustrated by sharp familial scenes that contend with understanding others and memory, this piece suggests that “the memory one possesses that is the purest is the memory one has forgotten.”

Disintegration’s four parts appear to position themselves against purity, with characters who consider meaning while remaining complicit in purity’s associative binaries and complexity. In lesser writers’ hands, a connected theme may read like a constraint, forcing narratives toward a particular voice or conclusion. Not here. Ah-Sen, Anglin, Code, and Henderson write toward purity in unexpected ways and blow their concepts open in this vibrant, intelligent collection.