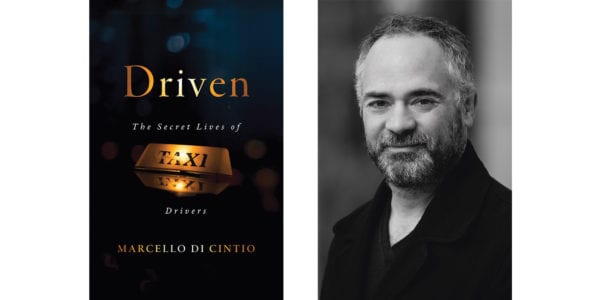 In his fifth book of nonfiction, Marcello Di Cintio avoids cliché by casting a wide net to profile taxi drivers open to talking about who they are beyond their hours at the wheel. The result brings these drivers to life in a way that should make any reader more mindful when they next take a seat in a taxi.

From these people who “push cab,” we hear stories of surviving death squads in Sierra Leone or war-torn Iraq, escaping post–Cold War Russia or the Westboro Baptist Church, living through the Holocaust, or simply leaving behind their home countries and families in search of a dignified living. Many have journeyed to Canada at their peril, hoping to discover a place of opportunity and freedom. Instead, they often find themselves embattled or isolated in a country that does not treat all of its citizens the same, certainly not those who come as refugees and immigrants.

Di Cintio, a two-time winner of the W.O. Mitchell City of Calgary Book Prize, lets the drivers’ individual stories shine in these anthologized glimpses while reserving his own judgments. The stories move quickly from the “good old days” of freedom and profitability, experienced mostly by white drivers, to those from immigrants who navigate classism and racism as they drive cabs. Di Cintio is careful to show that the myth of the “immigrant who made it,” one who transcends class and moves on from driving a cab in a dwindling market, is both condescending and reductive.

He finds his own views challenged along the way, as the book gradually debunks romantic ideas about a free and fair Canada, the homogeneity of immigrants and their beliefs, the working class, and even storytelling itself. There is a reason that one of Di Cintio’s subjects, author and ex-cabbie Rawi (Hage, pardon the spoiler), finds taxi drivers and outcasts more interesting than the literati he meets at festivals, or why long-time driver and Shakespeare obsessive Jens Andersen called the experience “the perfect antidote for all of the baloney theories stuffed into students in the classroom.”

Of course, the drivers also know what is good and what is ugly about their jobs, and about the cities and towns they drive in. We are reminded of the constant threat of assault and robbery, of looking out to the world while a potential attacker stares into the small rectangle of glass centered above you, of a trade often intertwined with sex workers who need a safe ride. One of the only drivers actually from the place he works, Phil Bailey, sees all of Yellowknife’s darkest corners plainly, both as the only Indigenous cab driver in the area and as a child services worker. Mo, a traumatized former soldier in the Iraqi Republican Guard, shuttles elites around Halifax as a kind of useful, “exotic” kept man whom they both reward and use as a reliable personal concierge. He uses them for the perks and the paycheque, while coping with the damage left by a violent, horrific past, and shows an affecting depth of empathy and vulnerability. None of the drivers are under any illusion about their passengers or their prospects.

Ikwe Safe Rides in Winnipeg, created to protect women from assault and extortion by cab drivers and others, including police, is a community of women who drive not to make money (it is volunteer run) but out of necessity; they offer something that is so profoundly valuable: free, safe passage when there is none. The main adversary to these women are the city’s taxi drivers, none of whom speak to Di Cintio. It is a nuanced chapter that further explores the complexities of gender, class, and race in diverse urban communities, which are so often ignored or understood only in the shallowest of ways.

In a world of ride shares and COVID-19, the stories in Driven are coloured by the spectre that this livelihood could be lost. Some drivers have fought for their very lives only to land in Canada and have to fight for their jobs against exploitative corporations and greedy, unsympathetic municipal governments. All of these drivers have suffered greatly as the industry bends to near breaking under life in the pandemic. But there is hope in these stories and a powerful dose of humanity in how these drivers endure, all while looking squarely at inequities and uncertainty. The cabbies profiled by Di Cintio are not here just to tell stories; they reveal truth in a way that may well disarm and sharply adjust the perceptions of many readers.