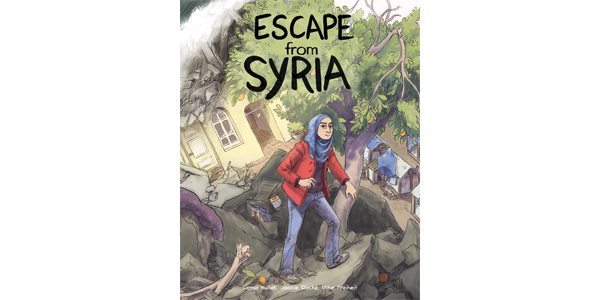 In 2014, a phrase was anonymously spray-painted on a wall in Homs, Syria: “When I leave, be sure I tried everything in my power to stay.” This poignant graffiti reverberates throughout Escape from Syria, a graphic novel that follows the six-year journey of a fictionalized refugee family, as told through the eyes of the teenage daughter, Amina.

The family’s home in Aleppo is destroyed by a bomb, forcing them to leave the country for refugee camps in Lebanon. They struggle to find food, education, and other basic resources that the Lebanese government withholds.

The family is an amalgamation of the many refugees that journalist and first-time author Samya Kullab met as a reporter working in Lebanon, Turkey, the West Bank and Gaza, and Iraq. Kullab doesn’t provide an in-depth look into who these characters are outside of their refugee experience. Instead, she foregrounds the conflict’s impact on those driven out of their home by violence. The family’s story introduces readers to the facts and faces at the heart of a politicized issue, with a particular focus on young Syrians whose lives have been overturned.

Jackie Roche’s drawings and Mike Freiheit’s colour work add intensity and solidify the strong emotional engagement Kullab creates. Feelings of anger and fear are conveyed beautifully with thick black brush strokes where the page’s white gutter usually lies. When Amina’s mother tries to convince her daughter that marriage is the only way she can be safe in the camp, Amina is left without words; Roche and Freiheit provide pulsating crimson red circles around Amina as a means of indicating her pain and frustration.

There are big visual moments in Escape From Syria, but the subtle ones are even more effective. In a present day scene on a Toronto bus, the father and daughter sit together, their eyes and body language betraying sadness and disconnection from their surroundings. They may be safe, but this wasn’t the life they envisioned.