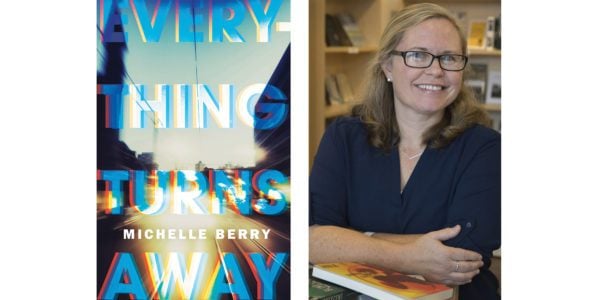 In this way Michelle Berry’s Everything Turns Away feels timely, though set during the unprecedented tragedy two decades ago. The thriller begins on Sept. 10, 2001, during a mundane yet ill-fated Monday night dinner party. Paul and Sophie host Allan and Helen; both couples are new parents and imbibing too much in their momentary freedom. No one at the table seems to like each other very much, and alcohol fuels petty irritation, argument, and misbehaviour.

Things move from a comedy of drunken errors to tragedy when Helen stumbles home after dinner to find the babysitter with an unsanctioned guest. In anger, she recklessly sends the 16-year-old into the Toronto night alone, where she mysteriously disappears. The following morning, while Allan and Helen deal with the missing babysitter’s distraught parents, across town a hungover Paul finds a screaming woman in the street. After following her inside her home, he witnesses something grisly that will change him forever – and all of this before the first plane hits the North Tower at 8:46 a.m.

As Everything Turns Away unfolds, it offers a fascinating – if bleak – commentary on the way we act in times of widespread grief and trauma. There is pervasive anxiety, suspicion, and resentment, but there is also the rejection of the things that leave us feeling trapped in our lives. As the characters try to make sense of the various disasters that plague them, they take stock, healing and destroying in equal measure.

Few characters in this novel are particularly likeable, but when it comes to the reader’s enjoyment, that doesn’t matter. Berry’s skilled, unforgiving rendering of these flawed characters, along with her propelling prose, is exactly what makes the novel so compulsively readable. And while the myopic selfishness of Paul, Sophie, Allan, and Helen is abhorrent, their grievances are painfully familiar – the inevitable trials of marriage, the perils of early motherhood, even the basic responsibilities of adulthood. “Life used to be easy, Allan thinks. Before the kid. Before marriage. Before September 11th and the missing babysitter. Everything just seemed easier.” The messy horror of life has caused them to act out, and while we don’t applaud their actions, we can uncomfortably understand them.

With more depth than your standard thriller, Everything Turns Away rejects platitudes in the face of deep uncertainty to instead assert a painfully honest analysis of human behaviour. A more damning interpretation of Berry’s analysis is that we tend to focus on ourselves even when the circumstances demand perspective; a more optimistic take would be that life, despite everything, goes on.