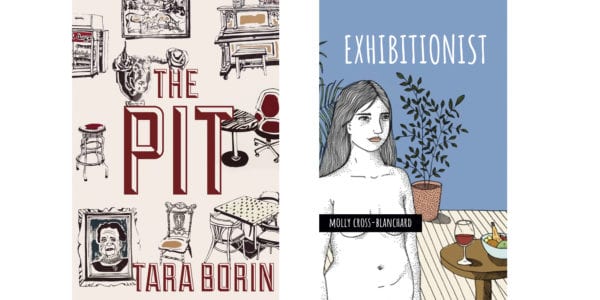 In their debut collections, Tara Borin and Molly Cross-Blanchard both profess the longing and desire of relationships. While Borin connects their poems’ characters – whether dead or alive, human or animal – with location and atmosphere, Cross-Blanchard is confessional and self-referential when negotiating the poems’ relationships, whether to her body or to the Canadian state.

For Borin, “all roads lead / to the Pit,” a local nickname for the Westminster Hotel in Dawson City, Yukon. In the voice of a bartender at the Pit’s dive bar, the poems encounter diverse characters, allowing for an anthropological exploration of the town and its residents. The speaker is a local informant to the reader: a white settler who through their long association with the Pit and liminal position as a bartender has become a resident.

The Pit is the nexus where desires (queer or otherwise) begin and end, its halls haunted by ghosts. In “Wraith,” a ghost “grips your arm / whispers // I can’t find / my room,” while the metaphorical “ghosts of blackouts past” provide company in “Drunk Tank.” Apart from these ghosts, there are missed connections in “We’ll Never Have Enough of This”: “Come talk to me / I’m that girl – / you are beautiful and … // You should dump him / before he dumps you / dingus.” There’s an unmistakable tenderness in “dingus,” the speaker longing for the woman in question. This desire echoes “Heartbreak Hotel,” where a woman’s “life tumbles from the same duffle bag she / arrived with a year ago” as she yearns for a former lover “in a / cheap hotel room.”

In the penultimate section, “The Hard Stuff,” Borin’s speaker offers glimpses into personal life. We become witnesses to a marriage that breaks down in “Punch,” “Telephone,” “The Addict’s Wife,” and “Enough.” The speaker longs for a “handsome young constable / all-angle-jawed, blue-eyed” in “At the Cop Shop”: “When he reaches / my ring finger / I am briefly grateful / that the fish-belly mark / left / by my wedding band / has finally / faded / away.”

Despite the potential for bleakness and loneliness in a place as isolated as Dawson City, Borin’s speaker never lacks hope. The community of the city and the Pit always provide company; the characters are never left to feel alone. In the closing poem, Borin folds their reader into an image of the kinship at the Pit: a wall of the bar holding photos of the dead includes the reader. “Every so often [the patrons] … will speak your name / share your story / so you’ll not / be forgotten / in time.”

In Exhibitionist, Cross-Blanchard’s speaker could be the poet herself, and the depiction of desire here is tender yet awkward, fumbling. She sketches memories and lays out her longing for love and for aspirations she can never reach in language that is blunt – and at times painfully honest. In “You’re not allowed to die,” she describes her desire for a familiar long-term relationship and weaves kitschy romance in her wish “to grow so sick of you the grandchildren say / Do they even like each other?” and sexual familiarity in the comfortable “handies / in a tent on top of a frosty mountain peak.” In other poems, such as “It’s Clockwork” and “We’ve all got a poem called Blood Quantum,” she evokes the stark divide between the desired, imagined objects of the future and the reality of our present circumstance. She withholds any judgment of these desired objects, as if seeing them as they are is the only way to make any sense of them.

Cross-Blanchard writes of managing her own expectations while desiring acceptance. “Let’s talk about it” negotiates her critical perception of her body; she imagines how others see her, be it the reader – “People might read the poems / and then flip to the author photo / and either they’ll think yes, fat / or they’ll think yeah, right” – or the definition found in her clothing size, a “mean trick / by the fashion industry, which calls me / Mid-size.” Her struggles with body acceptance surface when she reveals that she “sometimes hate[s her] body but … [I] don’t hate fat bodies,” a trace of regret in “sometimes.”

In describing the fraught relationship between the Canadian state and Indigenous identity–formation, she says, “I don’t wanna have to tell my babies You’re Métis / but Can*da says you can’t carry the card.” In a poem near the end of the collection, “Pinky drum,” the poet puts the onus of her Métis identity on another, structured as a coy message from her mother: “I must be feeling bad for telling you the other day that you’ve / only got about a pinky’s worth of Métis in you … // That’s how I feel about being Métis, hey? Like it’s this little drum beating / just for me.” Cross-Blanchard then salvages herself in the closing poem as she scoffs at vulnerability.

Borin and Cross-Blanchard pen powerful debuts, reclaiming loneliness and regret through pervasive desire. While their speakers reveal longing and intimacies, it would be a mistake to label any vulnerability in these collections as weakness.