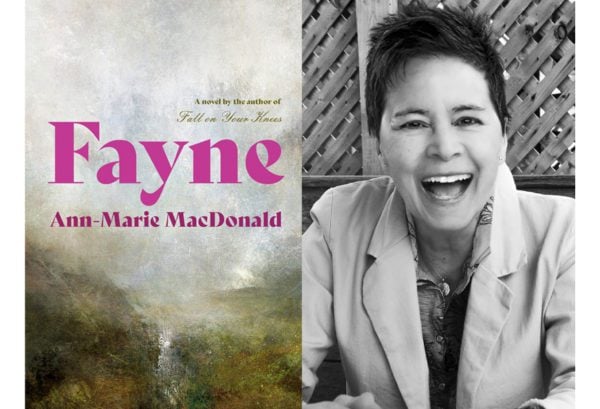 Ann-Marie MacDonald’s first novel in eight years, Fayne, is a reinvention for the bestselling author, who turns her attention away from the Canadian locales of her previous works to the wild borderlands of the British Isles. In this doorstopper of a book – which runs to 736 pages – we follow a young person named Charlotte Bell who comes of age in Fayne, a secluded estate situated on the border between England and Scotland.

The novel opens with a pamphlet for visitors, introducing “Fayne House, Stateless Home.” The writer tells us of the history of the Bells, their prosperity and eventual decline, and gives an architectural history of the estate, which serves as a mini history of Britain. Importantly, we learn about the surrounding moorland, which “encompasses bog, stream and fen; wooded glen and windy fell; lochan and secluded dell.” This atmospheric language pertaining to the natural world proliferates in the opening pages as Charlotte restlessly roams the estate.

The advance review copy includes in the front matter MacDonald’s sketch of an androgynous person, which is accompanied by a note that reads, “I had heard something out in the fen.” In a thank you note to the reader, she writes that the book began with an image of a windswept moor: “Then I drew a picture – literally. I am no visual artist, but my stories always seem to start with an illustration. In this case it was of a young person in romantic 19th-century garb. I couldn’t tell if it was a young man or a young woman.” This ambiguity is crucial to the novel.

In the opening chapters, Charlotte collects and dissects animals with her father. They discuss Aristotle and atoms, wars and Caesar. MacDonald is wildly successful in creating a rich Victorian world as seen through a young person’s eyes. Charlotte addresses the reader in the opening chapters, inviting us to glimpse the circular arc of the story right at the outset – after all, the telling itself is a potent act in MacDonald’s works, including this one.

We are led to believe, as is Charlotte, that she has a “condition” which requires her to be kept in isolation. MacDonald includes various documents and forms of writing, such as letters and field notes, that are well-placed to offer perspectival shifts; we learn about Charlotte from different points of view as the narrative progresses. The effect is arresting. For example, the notes of the doctor performing a procedure to cure Charlotte’s “condition” have the brutality of a surgical poem:

In Fayne, MacDonald weaves a story of a borderland that is as indefinable as its protagonist. It may take a while to settle into the slow-to-unfold plot and the archaic syntax of Fayne’s pages, but with its tenderness and twists that recall Charles Dickens’s Bleak House and the upstairs–downstairs dynamics of shows like Downton Abbey, MacDonald’s fourth novel is a paean to the act of storytelling and a triumph that challenges the constructs of gender.