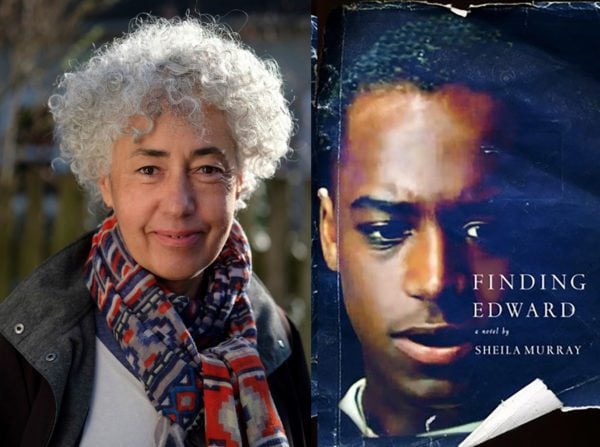 Sheila Murray’s debut novel, Finding Edward, chronicles the story of Cyril Rowntree, a twentysomething international student who arrives in Toronto from a small village in Jamaica heavy with responsibility and grief from the loss of his mother and his benefactor, known as Grandpa Nelson. A straitlaced, clean-cut young man who refuses “to define myself as an outsider, though that is what I feel,” Cyril navigates immigration, education, racism, and a search for acceptance following his arrival. He also embarks on unwinding a mystery about a forgotten history. Patricia, the local bag lady, whom the pastor calls “an unlucky penny,” leads Cyril to a suitcase of artifacts that she believes to be significant – and, in a photograph dating from 1922, Cyril sees a reflection of himself. This begins his quest to find Edward, the young boy in the picture.

Edward Davina, in his early nineties, lives alone in a stuffy single-room apartment, with few friends and fewer reasons to leave his home. He recalls pivotal memories from his life, which track with Cyril’s gradual decoding of the clues he finds in local archives. As Cyril sifts through the fragments of Edward’s life, he begins to cultivate an imaginary relationship with Edward, talking with him and walking with him in his mind, gesturing to his belief that “we’re almost brothers, Ed.”

Cyril is convinced of the kinship between himself and Edward, noting the similarity of their circumstances – being abandoned by parents because of the racial politics of raising a mixed-race child. Murray’s rich narrative offers mystery, but it also spans decades of Canadian history, differentiating Finding Edward from the typical immigrant story. The prospect of better understanding Edward’s life in Canada offers Cyril an escape from his own excruciating isolation. Murray triumphs in capturing the undeniable and unmistakable ache of severe loneliness.

As the point of view alternates between Cyril and Edward, the similarities and contrasts between their lives are explored with descriptive and energizing prose. The parallel grief, romance, and trauma are often balanced with tender humour and humble self-reflection. Edward and Cyril are ghosts in each other’s stories; their overlapping experiences of (un)belonging are at once salient, measured, and almost eerie.

Murray’s writing is unhurried in pace, and Cyril and Edward’s voices are finely nuanced. Particularly striking is Cyril’s relationship between movement and place; whether he’s in Jamaica or Canada, walking, for him, can be an act of solace. “The dark took the tall trees that were his landmarks, the way he measured how far he’d come, how far yet to go. Cyril had taught himself to find his way by holding onto the night.” Walking does him well until one rainy night in Toronto, when “walking while Black” brings about unexpected violence.

The narrative of Edward’s life is anything but leisurely. Orphaned, he labours hard all his life, bouncing from a children’s home to a relief camp to riding the rails to fighting in the Navy to working at the Canadian Pacific Railway and at a logging camp in B.C.

Within Cyril’s story, Finding Edward is unequivocally a Toronto novel, and Murray offers us a prism of multiple Torontos: the youthful energy of affluent Trinity Bellwoods, the bustle and flash of downtown at Dundas Square and the adjacent campus of Ryerson (now Toronto Metropolitan) University, and the shadowy concrete presence of the Mount Dennis neighbourhood in the northwest of the city, “a grey, flat place, holding close to streets as smooth and busy as highways that ran for miles.”

However, through Edward’s life, Murray unpacks her preoccupation with untold local stories of Black Canadian history. The novel nods to historical figures and important events like the formation of the Black labour union for sleeping car porters, the demolition of Africville, the 1938 Spadina March for union solidarity, and more. Much of the history is well-woven into the narrative, though secondary characters often function as mouthpieces for tidbits of Black Canadian history.

Nevertheless, Murray’s rendering of Africville, along the “worn dirt path … into the town of little houses scattered higgledy-piggledy around the hill,” is seamless and immersive. She depicts a place where “after a few days, it was as though [you’ve] been there for years,” a geography milestoned by the Bedford Basin – “a living thing” – and the kindness of Black folk.

Thematically, Finding Edward uncovers the many possibilities of strangers being vulnerable with other strangers: cultivating connections with those not related by blood, encouraging the weary-hearted to gather what is immediately attainable. “This is how you know yourself,” the ghost of Cyril’s adoptive grandfather lectures, “through history and language—this is theirs, but take what you need, make it your own.” A simple connection – hand-sewn dollies – stirs a bittersweet nostalgia within Cyril and allows him to trust Patricia, trust himself, and find profound connection with Edward, a stranger he knows so well. Murray, in this well-researched and weighty novel, magnifies the delicate threads of trusting strangers, navigating belonging, and uncovering everyday histories.