Fired Up about Consent 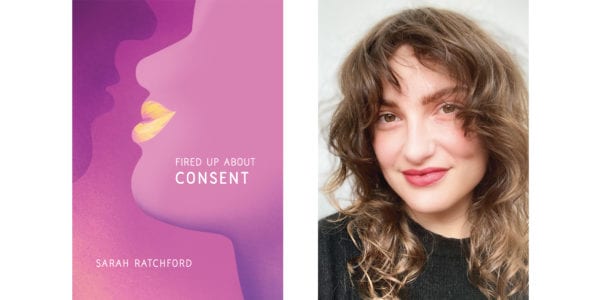 As a survivor of sexual assault, Ratchford writes candidly and promotes the rejection of rape culture. By decrying language that minimizes – the use of “inappropriate conduct” instead of “rape,” for example – Ratchford debunks myths, such as that rapists are scary strangers lurking in dark alleys. One interviewee notes that abuse against women is often phrased to sound as if it’s simply “stuff that happens, like tangles in your hair.” Ratchford also slams the notion of virginity, calling it a cultural construction: “After you have sex, you’re still the same person, not changed or besmirched.” But, they point out, “when someone is raped, we cross over to a new way of being.”

Along with dismantling victim blaming, Ratchford thwarts the notion that a survivor’s clothing holds any relevance in the justice system. And in wanting to be inclusive of all women – cis gender, trans, and femmes – they explain how they eventually landed on the imperfect term “womxn.”

The author makes it clear that respect is fundamental to any conversation about consent, which is why they recommend frank discussions before, during, and after sex: “Womxn need to be clear about what kind of sex feels best for us, and our sexual partners need to listen.”

Abundant sidebars provide more detail on topics such as gender, asexuality, communicating consent, and what to say to someone who’s been sexually assaulted. Occasional bursts of levity (“the clumsy but hilarious moments of trying to wiggle our legs out of tight pants”) and the odd f-bomb offer respite from the intense topic.

Teachers could use this book, which includes 15 pages of endnotes plus a comprehensive index, to spark thoughtful classroom discussions about consent. Likewise, parents seeking inclusive guidance for their young adult children will find this volume offers much expertise and wisdom. Fired Up about Consent is an articulate, intelligent, and well-researched primer about consent culture for youth.