Float Like a Butterfly, Drink Mint Tea: How I Kicked the Shit Out of All My Addictions 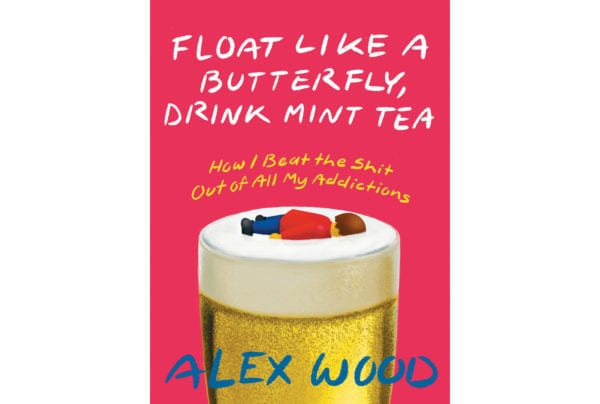 Most people have something they fantasize about quitting (or at least cutting back on). While these desires to change sometimes have a basis in our health, whether bodily or financial – those weekly stress-relieving trips to Sephora do add up – most often it’s because these things have a grip on us that we don’t always want to admit. When it comes to coping mechanisms, the boundary between healthy and unhealthy can be hard to distinguish except through the rear-view mirror.

Comedian Alex Wood explores this boundary in his new book, a series of personal essays about quitting his various addictions. After getting sober from cocaine and alcohol, Wood continued to struggle with lingering medical problems created (or at least exacerbated) by those substances. He initially balked when his doctor recommended that he also give up cigarettes, coffee, red meat, dairy, and sugar – a long list of heady pleasures, after all – but he eventually hit on a very millennial approach to the task: he would start a podcast. Alex Wood Quits Everything is about, well, quitting everything. He expanded on his doctor’s list to include other things he felt were negatively affecting his life (cannabis, gossip, porn, social media); in each episode, he quit something new and discussed the challenges involved.

Float Like a Butterfly, Drink Mint Tea is a candid look at how Wood stitched his life back together after several years of unravelling it, and the narrative framework of quitting one substance after another ensures that the pace is brisk and never boring. Some of the old truisms about getting sober are trotted out – you have to take it one day at a time, relapses happen – but Wood has a gift for giving them fresh perspective and insight. Readers will be left to do the kind of uncomfortable introspection that addiction memoirs should provoke, namely: what self-destructive habits would they be reluctant to quit? They’ll also likely be relieved to know that, while Wood has stayed away from drugs and alcohol, he has a few vices (Twitter, pizza) that he’s back to indulging in. He’s only human after all.

Wood’s writing is at its best when he’s at his most vulnerable and least humorous. Make no mistake, there are some very funny moments in the book, and Wood has a unique turn of phrase, but sometimes the jokes are just too much (especially when variations on the same theme are repeated multiple times). One gets the sense that the sometimes relentless patter is rooted in insecurity, as if Wood is concerned that readers won’t want to engage with his story unless he’s constantly doing a bit. But he shouldn’t worry: Float Like a Butterfly, Drink Mint Tea proves that he’s talented, interesting, and likeable even when the comedy curtain is pulled back.