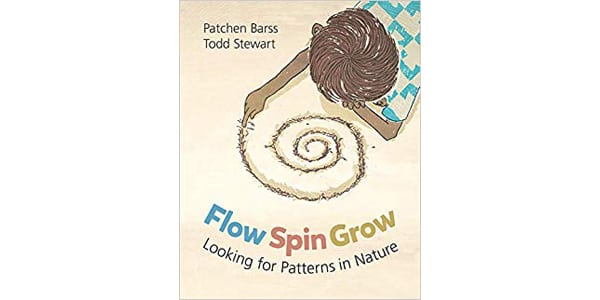 Flow Spin Grow encourages children to notice the patterns around them in their daily lives via the title’s three main concepts. What do a giraffe’s spots, the bark of a pine tree, and a cracked desert floor have in common? How are trees like rivers or human lungs? How do spinning particles – the invisible protons, neutrons, and electrons – that make up all matter relate to Earth’s orbit around the sun, or the moon’s around Earth? The book doesn’t always give answers but it does offer a key: “Branches tell you something is flowing. Moving objects make each other spin. Spirals mean that something is growing or shrinking.”

Saskatchewan-born, Montreal-based illustrator Todd Stewart brings just the right aesthetic sensibility to the project; his use of subtle, earthy tones and gentle, warbling lines lends a warm, human feel to figurative and non-figurative subjects alike. His drawings also make visual connections in a way that photographs would be hard-pressed to – between a mountain range and a river, or a swirling galaxy and bulrushes in a field of tall grass. We see how the spread and division of a tree’s trunk and limbs is mirrored underground by its root system, the latter seeking water in the same way leafy branches reach for sunlight.

Flow Spin Grow ultimately aims not to lead but to inspire children to make their own discoveries, to be their own best scientist: “Patterns appear again and again, sometimes in the most unexpected places. Try to find out why. There’s almost always an amazing explanation.”