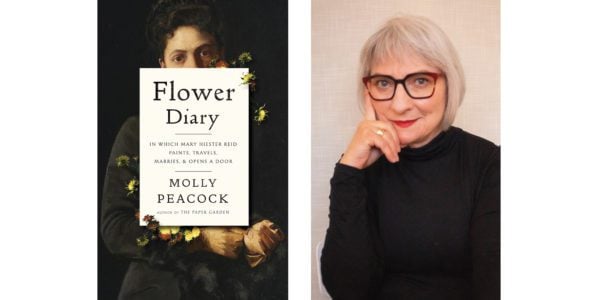 The subtitle to Molly Peacock’s new book about Edwardian-era painter Mary Hiester Reid suggests this isn’t a typical biography or survey of an artist’s work, and indeed Flower Diary is a refreshing treatment of a previously underappreciated talent.

As the Western art canon opens up to include women and artists of colour, a challenge arises: How does one explore the history of artists who went ignored and undocumented in their time? Women’s stories are often reimagined as fiction or framed within the context of a famous husband or lover. But in Peacock’s hybrid approach, she makes deeper contemporary connections to her own relationships and journey to becoming a poet.

From the outside, Reid’s story follows a familiar path. Despite her success – the Art Gallery of Toronto (now AGO) marked her death in 1921 by mounting the largest single-artist retrospective and the first for a woman – she is still not as well known today as her husband, fellow painter George Agnew Reid. Peacock’s research, however, reveals a trail-blazing artist who opened the doors for future generations of female artists.

Reid’s story is told in tandem with that of George, whom she met at the Pennsylvania Academy of the Fine Arts during the early 1880s. The two settled in Toronto and immersed themselves in the local arts community. Much of Reid’s work focuses on scenes of domestic beauty, influenced by the artists she carefully studied on their travels abroad. Reid’s paintings, which Peacock writes about with deep appreciation for their emotional depth, often returned to weighty fully bloomed roses bursting out of a ceramic vase or milk jug.

Peacock breaks up the Reids’ life stories with “interludes,” which add another dimension to the narrative and make clear how rare Mary and George’s partnership was in an era when women were expected to maintain a household and bear children, not waste their time on creative endeavours.

Some interludes connect Reid to the work of other artists, such as James McNeill Whistler. Others introduce readers to Mary Wrinch, another successful female artist of the day, who married George after Reid’s death thanks to an unusual arrangement. The parallels Peacock draws between the women’s lives round out not just the personal biographies but the realities of being both a woman and an artist at the time.

The interludes with the most impact, however, are ones in which Peacock draws direct parallels to her own professional journey and early insecurities. When does one get to call themselves an artist or poet? Is creativity or talent enough? The sections in which Peacock recalls her long and unconventional relationship with her second husband, Michael Groden, who died earlier this year, are imbued with a tenderness that flows out into the rest of the book.

Flower Diary is written with the lingering observations and lyrical touch of an established poet, yet with an easygoing, conversational tone often lacking in didactic art biographies. Although Reid is clearly a long-time fascination for Peacock, one can only hope that in the future she revisits other deserving talents.