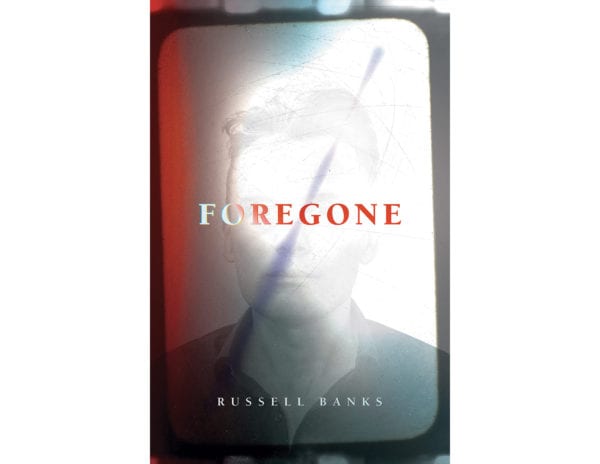 Midway through Foregone, the latest novel from Russell Banks, the main character recalls a woman who published a memoir titled My Autobiography as I Remember It. Banks’s protagonist, a Canadian-American documentary filmmaker named Leonard Fife, appreciates “the clarity and apparent modesty” of the memoirist but also recognizes that her title represents little more “than permission and justification for a book of lies.”

The tension between memory – which is notably fungible and prone to revision – and any notion of objective truth is a notorious point of contention where memoir and autobiography are concerned. Just ask James Frey. Or, indeed, Leonard Fife, who spends much of his time in Foregone insisting that he has built the bulk of his life and public career on a foundation of lies. Now in his late 70s, Fife is determined to set the record straight for his wife, Emma. He does this in an extended confession to her, chronicled by a film crew that has been commissioned by the CBC to make a documentary about one of the country’s great narrative nonfiction filmmakers.

Or perhaps not. As the novel progresses, it becomes increasingly apparent that Fife is an unreliable narrator of his own life. Suffering late-stage terminal cancer, he is on a cocktail of drugs and the narrative he unfolds is constantly criticized for being incoherent.

“Confabulation” is the word Fife’s oncologist uses to describe the way his patient conflates and elaborates events, time frames, and memories: “The chemo has dissolved chunks of his temporal lobe like acid. Synaptic pruning in a stressed-out seventy-eight-year-old brain takes care of the rest.” Which sounds reasonable, though what his doctor insists is a function of old age and cancer meds is actually, Fife asserts, a function of storytelling: “[It] is just the way Fife sometimes tells stories, that’s all, mixing memories and dreams and imagined details and meanings, embedding whatever drifts his way, exaggerating some elements and eliminating others, fooling with chronology, trying to make life more interesting and exciting than it would be otherwise.”

This, of course, is a reasonable description of what a novelist does, and in this sense, Foregone is a work of metafiction, constantly commenting on and demonstrating in its execution the way a writer crafts a work of imaginative prose. The question of what is true and what is fanciful in Fife’s account is ever present, though Banks’s approach is so fluid and his prose so polished that the novel’s style often undercuts its own characters’ insistence that Fife’s story must be flawed or exaggerated. “Don’t correct him or say this or that didn’t happen or couldn’t have happened,” Emma tells the confused filmmakers at one point. “What’s true for him is what’s true, period.”

But what Banks has provided in Foregone is a close third-person narration that dumps the reader bodily into Fife’s memory of his experience prior to emigrating from New England to Montreal during the height of the Vietnam War. That narration is straightforward and, notwithstanding a non-linear approach that flits around in the past and alternates with present-day scenes in Fife’s home with the film crew, comprehensible. Though the secondary characters insist he must be mistaken or prevaricating, as readers we are given no reason to disbelieve him.

All of which seems germane to Banks’s project here, which is a summation of one man’s youthful indiscretions and secrets at the end of his life. The filmmakers are more interested in Fife’s public persona: the ’60s counterculture youth who drank with Joan Baez and Bobby Zimmerman (before he was a world-renowned singer-songwriter and Nobel Prize winner) and the documentarian who made morally challenging films about subjects like sexual abuse in the Catholic Church. But what Fife intends is an airing of all the pent-up guilt and self-loathing he has been carrying since he fled his home country. What readers get is precisely what the increasingly frustrated filmmakers get: not a gossipy exit interview from a celebrity director but a pained and frequently unsympathetic portrait of a young man who, if he is to be believed, lied about why he left the U.S. and abandoned a pair of women who bore him children.

The nature of Banks’s novel is contained in its title, which carries a submerged pun. What is foregone is determined in a kind of Calvinistic manner, but the novel also traffics in what is fore-gone, that is, what occurred in the past and helped shape the present. Banks channels writers of a previous era – Roth, Updike, Mailer – who made masculine psychology and experience their subject and focus, a stance that is deeply unfashionable in today’s cultural environment. Whether readers remain patient with this foregone approach will depend on how willing they are to spend time with a voluble, untrustworthy, morally ambiguous character whose meandering narration demonstrates nothing so much as the impermanence of memory.