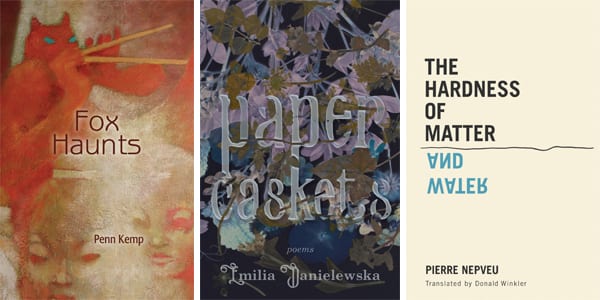 Penn Kemp’s Fox Haunts is a collection of poems about an enduring character in fables and folklore: the fox. Kemp is enchanted with her subject matter, and there are many playful moments. The poems are thematically related but tonally disparate. Some angles feel belaboured, and this makes for some missed opportunities.

The book opens with a poem from a child’s point of view. This differs greatly from the rest of the book, though there are a number of persona poems and poems of address. Many express a sense of admiration for the intelligence and perceptive abilities of the fox: “Her fixed glare freezes // poor rabbit into terror so pure it / dissolves into acceptance.” Hunting is a recurrent topic but begins to feels overworked, particularly in the absence of similar discussions of mating, raising babies, or different kinds of foxes in different regions of the world.

Some of the strongest poems occur in the middle of this collection and describe seasons or the environment. Take, for example, “At the Moment of Equinox,” in which “Wind in the upper birch stills. / The garden’s breath is so long / it is immeasurable.” These central poems take on more nuanced positions than elsewhere and help build the world of the book.

A number of other poems make reference to specific myths. Many of these are over-compressed and do not provide enough context. One particular poem makes passing reference to both Taliesin’s “Song of His Origins” and Ovid’s Metamorphoses; without prior knowledge on the part of the reader, the allusions end up being opaque when their purpose was to provide depth.

A challenge of project-based books is that the focus can be so narrow it creates redundancies and gaps. Another challenge involves whether every poem is working independently and at the line level. These are issues with the debut book by Emilia Danielewska. Paper Caskets is a book of prose poetry concerned with looking on death. Danielewska does this by assuming the role of a photographer and an obituary writer. Structured in four parts, the book features poems that give primacy to their shape on the page, rather than lines or line breaks. Poems are shaped in rectangles and squares, in resemblance to the photography and obituaries they reference.

The book opens with shocking and somewhat disorienting material. “Laverna” describes a stillborn baby, “umbilical noose still around her neck, her lips / bruised blue.” As this section continues, there are a number of disturbing portraits of dead children as tintype photographs, a method employed at the turn of the 20th century. It’s not ever made clear why the portraiture is of children, since death portraits were made of adults as well.

The second section, called “Obituaries,” contains poems simply titled with their subjects’ names, a tactic that represents a missed opportunity to complicate a reader’s expectations. This section contains poems with cut out spaces and paired rectangles of text on the following page, which do not function either as an extraction of the main text or in isolation. The purpose of this form is elusive and feels gimmicky. The final poem, “Carbon Copy,” begins by describing a man in a jewellery store who wants to buy a blood diamond for his wife, who purportedly enjoyed knowing labourers had suffered to extract it. This scenario strains credibility but it’s also hard to be in alignment with its moralizing position when other parts of the book itself feel exploitive.

Employing the prose poem with greater subtlety and success, The Hardness of Matter and Water by Pierre Nepveu is also a work of mostly block text. This book was a finalist for the 2016 Governor General’s Literary Award for Poetry in French (under its original title La dureté des matières et de l’eau, published by Les Éditions du Noroît) and has now been translated into English by Donald Winkler.

Divided into four sections, the collection explores Montreal by way of locale, season, and public art. The poems take place outside, in the elements – by the river, walking the streets, in a sculpture park. The Hardness of Matter and Water is a book full of vistas and vulnerabilities: “You won’t heal, said the voice. In the epicurean sweetness of grass- / es, you will expire. […] Tell everyone you are here, / that they may join you if they so desire.”

In untitled paragraphs that are often less than half a page, Nepveu composes long sentences reminiscent of wind being channelled down the streets between buildings: “Far off, the city is a garden of granite / and diamonds, it shimmers like an unpeopled dream, a dawning of / doubt in winter’s interrogation, forcing its suspects to ransack their / stores of truth for pearls, nuggets, jewels.”

The most engaging section of the book, called “Lachine Stations,” contains the most formal variation. Ekphrastic poems are paired with photographs of sculptures from the Musée plein air de Lachine. These poems verge on the metaphysical: “it was like a clearing inside / as if the landscape / had at last found in me / a place to lodge its light.”