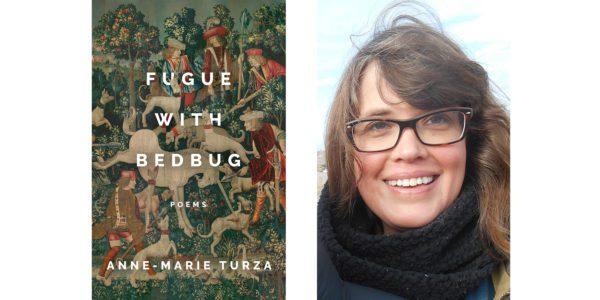 Anne-Marie Turza’s second collection with House of Anansi Press is a straight up weird book. But you will delight in its weirdness. Surreal at its core, the collection uses its musicality to ease its reader into the peculiar and to locate similar strangeness in our world.

As we read Fugue with Bedbugs, we are left to fend for ourselves in a poetic world where syntax seems typical but logic is fleeting. But, as the collection’s first poem makes explicit, “We do not need rescuing.” Instead, the collection’s earliest poems parade their illogic, reminding us that our world was already a mess of the imagination and that “Many similar impossible things are true / already.”

The poems become increasingly experimental and wild the longer the collection goes on. “Seated Figure with Snail Shell Head,” for example, is an ekphrasis of a non-existent and impossible painting. “The Wedding Party” is composed of dogs, flowers, and bakers. By the time the reader gets to “Dues in Arrears,” one of the collection’s stand-outs, with a unique form and wit, any resistance to the nonsensical nature of the poems has relented.

Part of the reason this collection is so successful is that the poems don’t feel immediately or aggressively surreal. The regular grammar and semantics of the lines and familiar poetic language results in a willingness to let the ridiculousness, impossibility, and absolute nonsense just kind of happen. In fact, if one approaches these poems with excitement and wonder, one starts to embrace and enjoy the oddity. A reader can be surprised by Turza’s nouns and beautiful, childlike imagination, and not miss the sense one bit. By the time the speaker says they’ve “fashioned from metal / a long-distance ship / installed with a dog heart / hammering madly,” the reader is fully able, with delight and wonder, to picture the ship taking shape and then flight. What’s more, the reader has been conditioned to accept, soundly, the logic that follows the speaker’s declarative “We’ll prove it” with the assertion, “there’s nowhere / animal panic won’t go.” Yes, of course, that must be true.

Amid the surrealism is a meditation on the relationship between language and embodiment. In “Down the Corridor a Chair with Wheels Rolls,” for example, Turza writes, “Sounds are mortal: yes ❑ no ❑ / Hours are mortal, and verbs – certain verbs / keep me from being cumulus.” It feels like silliness and at the same time a poignant meditation on language. I, too, have felt the grounding, holding presence of certain verbs.

The poems in Fugue with Bedbug continually take on unexpected and lovely new forms. They are truly refreshing. Indeed, just when you think the eccentricity might get boring, Turza surprises you again.