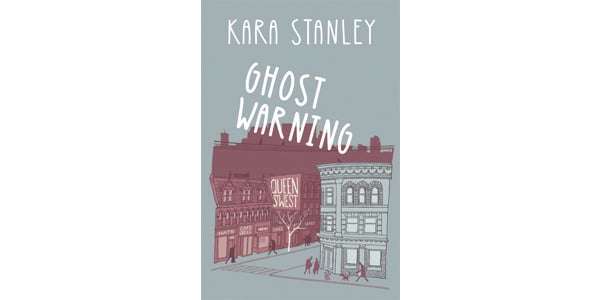 Seventeen-year-old Lou James recalls her journalist father saying to her in a moment of reflection, “Maybe there is no point in living or dying, other than the overarching point that we are biological organisms trying to propagate our species. The rest is just stories.” But her father’s untimely death, which occurs at the beginning of Kara Stanley’s first novel, is not pointless: it initiates, though painfully, the naive young Lou into her own story, one that will take her out of her small town into the heart of the big city, and eventually across the country and into the unknown.

After Lou discovers her father’s body in the garage of the home they shared, she leaves her school, friends, and love interest in the fictional town of Linden, Ontario, and goes to live with her older brother Jonah in an apartment in Toronto. The sudden move to a fast-paced, potentially dangerous urban environment upends Lou’s sheltered existence. The city both terrifies and fascinates her: “There are so many faces, so many stories, it’s a minefield of humanity per city block. … And all these faces, in their singularity and loneliness, in their tenacity and grit, each and every one claims a part of you so that you can return from a simple walk along Dundas and be shredded to your core, vaporized.” No longer does Lou have the comforting familiarity of her father’s routines and wisdom, or the motherly kindness of her neighbour, Mrs. Turner. She must now figure out how to survive, financially and otherwise.

Lou soon begins to piece together a motley family for herself. This surrogate family includes Isabelle, who befriends Lou on her first night in Toronto (and who has her heart set on Jonah). Isabelle helps Lou get settled in a new school, and lands her a job at the bakery where she works for a charming couple, Leo and Anna. There’s also Sal, an irascible old friend of Lou’s father, who owns a bookstore close to the bakery and provides some sense of connection to the past. Even the elderly, homeless Stella – a tragic figure – becomes a significant part of Lou’s new life.

Ghost Warning is very much a coming-of-age-suddenly story, and Stanley expertly moulds the character of Lou with a great deal of perspicacity, admiration, and empathy. While these traits make it possible to overlook the novel’s flaws, the book nevertheless tries to tackle too many themes – including grief, fear, violence, homelessness, desire, confusion, and sexual awakening. Lou’s attempts to place herself in unfamiliar surroundings and to question her existence in this “sad and beautiful world” are interesting enough without the inclusion, for instance, of her amateur detective work into a series of violent acts in her neighbourhood. This aspect of the novel seems like an unnecessary injection of intrigue into an already worthwhile read.