Growing Pains: The Future of Democracy (and Work) 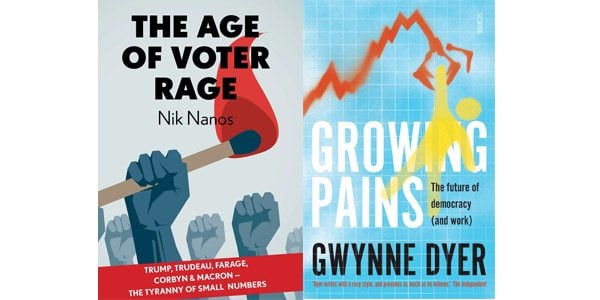 Two seismic political events shook the world in 2016, confounding pollsters and pundits and jarring politicians and citizens alike. The first was the Brexit vote in the U.K.; the second was the election of Donald Trump as U.S. president. Neither was supposed to happen. Former Conservative prime minister David Cameron was so sure the U.K. referendum would result in a victory for the “remain” side he staked his political career on the outcome – and lost. And as late as 10:20 p.m. on the night of Nov. 8, 2016, the Upshot blog on The New York Times website was putting Hillary Clinton’s odds of winning at 85 per cent. “A victory by Mr. Trump remains possible,” wrote Josh Katz at the time. “Mrs. Clinton’s chance of losing is about the same as the probability that an N.F.L. kicker misses a 37-yard field goal.”

Oceans of ink have been spilled in the months following these twin occurrences trying to explain what happened and how so many people could have been so wrong about the potential outcomes. The key takeaway from The Age of Voter Rage, Canadian pollster Nik Nanos’s new book, is that the advance predictions weren’t really all that far off the mark. (This conclusion, while undoubtedly correct, is also somewhat self-serving.)

The Brexit vote and Trump’s election have only the appearance of hugely dramatic swings in voter behaviour. The “leave” campaign in the U.K. eked out a narrow margin of victory – 3.8 percentage points, or 1.2 million votes out of a total of 33.5 million cast. Trump, meanwhile, took the Electoral College as a result of razor-thin margins in three states: Wisconsin, Pennsylvania, and Michigan. Nanos points out that a paltry 80,000 votes in those combined states put Trump over the top.

Nanos and fellow Canadian Gwynne Dyer each assert that one of the driving factors behind the upsurge in populist movements in the U.S., the U.K., and elsewhere is a roiling anger on the part of a segment of voters that feels increasingly forgotten or shunted aside by the combined forces of globalization and automation. The two authors differ in their specific diagnoses of this phenomenon. Nanos suggests that class warfare in western democracies is usually driven by educational levels among various populaces. Economic triggers can result in populist uprisings, but the particular circumstances differ from country to country. In Growing Pains, by contrast, Dyer blames the loss of jobs on a global economy that finds galloping efficiencies in automation – a phenomenon that will only be exacerbated by the advent of driverless cars and artificial intelligence – and an increase in the income gap between the very wealthy and the very poor.

If Dyer is the more persuasive of the two, this is largely because his argument is more focused. Nanos ranges widely (especially in such a short book), surveying recent elections in the U.S., the U.K., Canada, and France, and drawing in threats to democracy posed by the proliferation of bots and trolls, fake news, and algorithm-driven computational propaganda (something that is clearly not insignificant, as the recent revelations that Cambridge Analytica benefitted from the harvesting of 50 million Facebook users’ data attests). Dyer does take arguably spurious detours into subjects such as the history of democracy and North Korea’s nuclear weapons program but remains mostly focused on citizen discontent resulting from heightened inequality.

Dyer is also – by some measure – the better writer. A statistician by profession, Nanos seems ill-suited to the demands of long-form prose, parcelling out his contentions in bite-sized (and highly repetitive) sections that frequently marry tortured prose and circular arguments: “As sub-sets of voters become increasingly disillusioned with the system and anti-establishment in perspective, establishment parties are on their heels because they are perceived as agents of the establishment.”

The argument Dyer forwards in Growing Pains basically recapitulates that of French economist Thomas Piketty, though updated here for the Trump-Brexit era. Despite warning signs inherent in the 2016 U.S. election (Dyer refers to Trump as the canary in the coalmine of populist anger capable of undermining democratic institutions and traditions), what we are living through is not a crisis on the order of the Second World War. The recent spasms in Europe and North America, Dyer suggests, amount to “growing pains, not a terminal illness” for liberal democracies. And in advocating for some version of a universal basic income as a means of addressing fiscal inequality, he suggests that we have the solution to our problems, if only we are willing to implement it.

Nanos, on the other hand, is quick to point out that the current manifestation of populist rage – driven as it is by a small number of voters on the margins of democratic societies – is different, and potentially more destabilizing, than similar movements in the past. Nanos concludes that “the creeping rage of voters should not be underestimated. It signals that the fundamental diagnosis of disconnectedness, disaffectedness and economic pessimism has not been addressed.” The neo-liberalism born in the Reagan-Thatcher era of the 1980s came with compounded interest in the form of a higher cost of living coincident with depressed wages and precarious employment. It was only a matter of time before that bill came due.