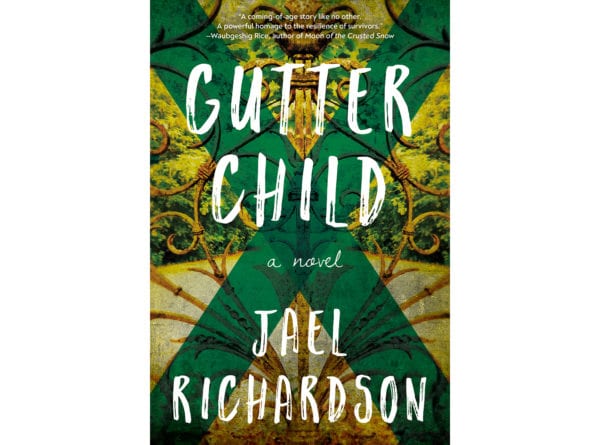 The debut novel by Brampton, Ontario, author Jael Richardson – founder of the Festival of Literary Diversity and author of the memoir The Stone Thrower – is an outstanding and fearless story that follows a young woman’s journey of self-discovery and strength as she forges her own way in a ruthless society. Much can be said about Richardson’s impressive world-building: not only is Gutter Child set in a dystopia, featuring a bleak institutional system and a harsh social environment, it also depicts an alternate reality – its history mirrors our own, with some slight differences.

Gutter Child takes place on a land mass called the Mainland, where there exists a profound and violent legacy of colonialism, racism, and classism, though these specific terms are never used in the novel. The Sossi people – called Gutter people in the narrative present – are segregated from the Mainlanders. The Gutter people live in a large, low-income, gated community (the Gutter) where they are constantly monitored by armed Mainland guards. From birth, each Gutter person owes a large sum of money to the state, simply for being who they are – reparations from an ancestral war. Once they have paid their debt, they reach “Redemption Freedom,” but this is deeply difficult to attain, albeit highly desired. The world of the Mainland and the Gutter, and the people who occupy them, is whole, rich, and believable.

Elimina, the novel’s main character, is a Gutter child raised among the Mainlanders as part of a special project that abandons her in an environment where no one else looks like her. The subject of intense discrimination and mistreatment due to her ethnicity and ancestry, she is brought to an academy early in the novel to complete her education and work, and her life takes several striking turns.

The elaborate analogical comparisons Richardson engages in are noteworthy. Many of the novel’s plot points and institutions seem to connect – directly or indirectly – to foundational aspects of anti-Black racism in America. We see comparisons to chattel slavery, segregation, and the Civil Rights movement as Elimina walks a path to her own coming of age and political education. Gutter Child asks what it would be like for a young marginalized woman to conceive of her own future, to make her own choices, especially when she had been fed lies and half-truths her entire life in a world that deemed her worthless because of her ethnicity. It matters that in this novel Richardson crafts a space where love and resilience can prevail.

Gutter Child is also a novel about the power of stories. Time and time again, we see the lasting, sometimes dangerous, effects of dominant narratives passed down by powerful and controlling institutions. Born in the Gutter but raised on the Mainland, Elimina learns of her world’s history and of her position in society from the perspective of the “winners.” When she finds herself surrounded by other Gutter people at the Academy, she experiences internalized discrimination, culture shock, and a swath of denial. Later, she learns of another creation story, an oral history that centres her ancestors and their traditions, and discovers how unwritten stories are treated differently. News articles, letters, and underground networks also show how the ways in which one frames a story can affect external attitudes. The stories one is told in youth, which help form our unexamined biases and our dreams strung together from idealistic hopes and falsehood, may be divorced from reality.

In Gutter Child, conceptions of home, community, and family are constantly explored and interrogated. How do you create your community? How do you carve out your own space and identity when others try to shape it for you? How do you do this when you’re relentlessly told your life does not matter?

Elimina is forever finding and losing her family. The institutional violence of the state tears loved ones apart, abuses children, and ties Gutter people to debt, making intergenerational wealth impossible. Throughout the story, Elimina reassesses her values and goals with respect to her relationship with the Gutter and what a community there could mean. As the people around her, whom she cares about, discover things about their own lives, limits, and ends, and make their own choices, the questions of who she can rely on and where to seek a sense of identity resolve.

To travel with Elimina on her journey is to be with a complete and whole person as she comes to truly understand the nature of the world in which she lives. Richardson expertly details the small beauties, hardships, and hopes that accompany such an arduous life, which makes Gutter Child a powerful and unforgettable novel.