Has the World Ended Yet? 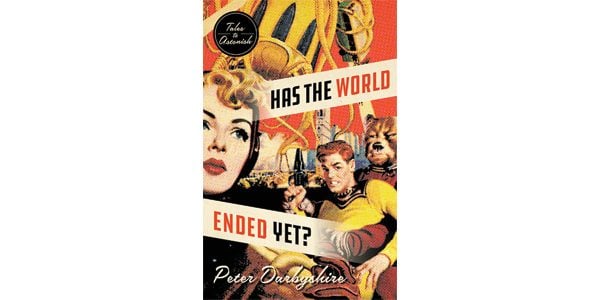 The short stories that comprise Peter Darbyshire’s seventh book – the fourth under his own name – are obsessed with ghosts and angels, superheroes and gods. They appear as manifestations of discarded, mythological histories that have risen up, unbidden and unwanted, to wreak havoc on characters already caught up in more everyday struggles.

In “We Are All Ghosts,” an archaeologist returns from a failed expedition to Antarctica and unleashes a Lovecraftian plague of ghosts in an effort to regain a lost love. “Déjà Yu Makes the Pain Go Away” has a zombie ad executive throwing himself into his work in an attempt to lessen the pain of being rejected by his living family. In the collection’s title story, a retired superhero relives past glories via a video game while angels descend from heaven, apparently to trigger the end of the world. Each of these pieces is bleak in tone and absurd on its face, but Darbyshire imbues them with unexpected emotional complexity and moral ambiguity.

Regardless of the details of their plots and settings, most of the stories are about the search for meaning in the face of arbitrariness. The story that most directly exemplifies this is “Casual Miracles,” in which a man inexplicably gifted with the ability to perform minor, mostly inconsequential miracles on demand longs for either an escape from the responsibility or the power to make truly meaningful change. His search for freedom leads him to answers that don’t really explain anything and conclusions that frustrate rather than clarify, compounding his existential despair. The story nearly veers off the rails into angst, but is eventually touched lightly by hope, and also the realization that – to paraphrase Kafka –while there is hope, it is not for us.

A few of the stories are a bit neater, with concepts that play out in a “just so” manner. “The Calling of Cthulhu,” about mythological figures finding second careers through a very specialized employment agency, is clever, and even funny, with unexpected touches of pathos. Others are less strong. “The Only Innocent Soul in Hell” and “A Murder in Hell” concern the adventures of a demon named Molox, and are among the weakest in the collection.

Three of the pieces (“The Bacchae,” “We Are a Rupture That Cannot Be Contained,” and “We Continue to Pray for Something to End Our Prayers”) are more like segues or interstitial fragments than stories, and are neither substantial enough to stand on their own nor connected to or supported by any of the other pieces. Has the World Ended Yet? blends genre and literary sensibilities mostly to good effect, but would be stronger with a more streamlined selection of stories.