Have You Eaten Yet?: Stories from Chinese Restaurants around the World 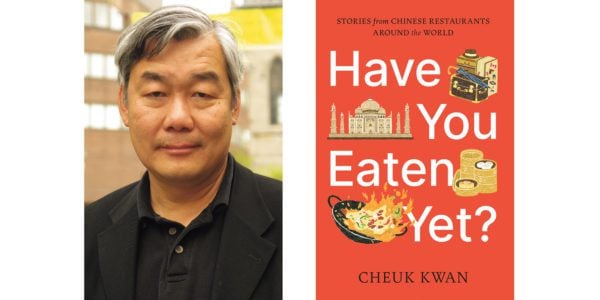 Among Chinese people, the phrase “Have you eaten yet?” is shorthand for “How are you?” This colloquial greeting, writes filmmaker Cheuk Kwan, “shows that you care. Because of war, famine and poverty, people in old China did not always have enough to eat. Perhaps that is how these words became an expression of concern for someone’s well-being.”

A companion to Chinese Restaurants, Kwan’s documentary series, Have You Eaten Yet? tracks his earlier film shoots and further explores the identities of Chinese communities outside China. To consider the factors leading to the Chinese global migration, Toronto-based Kwan and his crew surveyed the diaspora through food and restaurants, touching down on five continents and 15 countries, including Israel, Trinidad, Norway, and India.

“The term ‘Chinese food’ covers an area four times larger than Western Europe and the eating habits of more than a billion people, featuring cuisines from 56 ethnic minorities – including Tibetans, Uyghurs and Mongolians – as well as the Han majority,” Kwan observes. “You could say there is really no such thing as ‘Chinese food’; and, equally, that there are just as many hyphenated Chinese foods around the world.”

More than culinary tourism, the book portrays enterprising individuals striving for better prospects. Reflecting on Chow Hung Kong (a.k.a. “Noisy Jim”), who came to Canada as a paper son during the Chinese Exclusion Act, Kwan shows the impact this proprietor of the New Outlook Café had on the town of Outlook, Saskatchewan. Tired of toiling for her in-laws, Chinese-Mauritian Colette Li Piang Nam started a noodle shack that developed into Chez Manuel, one of the island’s finest Chinese kitchens.

Industriousness, though, is not the only focus here. Fleeing China as Mao rose to power, the Wangs, a Muslim Chinese family, made the perilous trek across the Himalayas to Pakistan and then Iraq before settling in Turkey. Visiting their China Restaurant in Istanbul in the 1970s inspired Kwan to create Chinese Restaurants. “Take a look behind every kitchen door and you will find a complicated history of cultural migration and world politics,” he notes. “The Jade Gardens and Golden Dragons that populate towns and cities from Africa to South America are intricately connected to the social schisms and political movements that propelled the world into modern times.”

Kwan writes about his own multinational identity as well (he was born in Hong Kong and raised in Singapore, Hong Kong, and Japan). This cross-culturalism suffuses the narrative and is further augmented by historical information on migration patterns and regional cuisines. Filled with lesser-known facts, such as China’s ancient maritime ties with Africa or the dominance of Chinese restaurants in Peru’s dining scene, the narrative never flags.

Have You Eaten Yet? joins the growing list of books about restaurants and the Chinese diaspora. Beyond conveying the perseverance and hope behind these establishments, Kwan offers a solid introduction to the forces that shape expatriate Chinese cultures and identities alike.